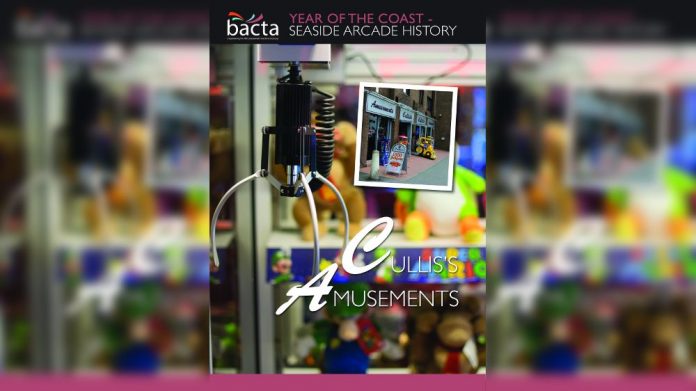 As part of its Year of the Coast campaign, Bacta took to Scotland to trace the history of Cullis’s Amusements and where it stands today – at the heart of Scotland’s communities stretching from Glasgow to the south west of the country.

Cullis’s Amusements was established in 1962 by Jack Cullis in the Scottish seaside town of Largs. Jack came from a travelling showmen’s family and was President of the Showmen’s Guild of Great Britain from 1955 to 1957. By the early sixties, the travelling life was becoming tiresome for Jack and his family. He sought out a permanent location, settling on the West coast of Scotland with his wife Rose and their family. Jack was the grandfather and great grandfather of the current partners. Jack opened a second site with his two sons, Jack Jnr. and Denis, 13 miles south of Largs in the seaside town of Saltcoats just a year later in 1963. “My father Billy came into the business in 1966 when he was just 15. The business was comprised of prize bingo and cash bingo sites but in the early seventies, we also started operating Arcade equipment” says Joseph Cullis, grandson of Jack Jnr. who joined the business full time in 1990.

“In the early 2000’s we were operating six sites stretching from the south side of Glasgow to the south west of Scotland in Dumfries. Recently, the business has been streamlined to three sites. I oversee our head office and FEC in Saltcoats. My younger brother, John-Craig, operates our FEC in Largs and my wife Suzanne operates our AGC in Dumfries. We currently have 30 employees which rises to 35 in the summer season”. In addition, the family have established a successful property business over the last 15 years. “We take a very hands-on approach with our business. My parents, Billy and Ray are still involved in day-to-day operations, especially throughout the summer season. We are very proud that we are a fourth- generation family business.”

A momentous occasion for the family was when they celebrated 50 years of trading in 2012. “We celebrated by holding a party in our premises in Saltcoats. To mark the event, long-time friend and avid supporter of the Amusement industry, David Lambie retired labour MP presented our oldest customer with a cheque to mark her 100th birthday. The business has faced some challenges throughout its 58 years such as the introduction of the smoking ban, the 2008 financial crisis and presently, the Covid-19 crisis.

“It was a huge worry when we closed our doors on March 20 for the foreseeable future,” says Joseph, “my biggest concern was for our staff, most of whom have been with us for many years.” Thankfully, the business has taken advantage of the government’s furlough scheme and benefitted from the grant scheme awarded to the leisure sector. However, Joseph highlights that the FEC sector faces immense challenges operating under social distancing guidelines. As for investment in the seaside, Cullis’s Amusements has a mixed experience. Largs is an affluent seaside town attracting many visitors due to its picturesque seafront and high profile sporting and cultural events. This includes the annual Viking festival and yachting regattas. The town is also home to the Inverclyde National Sports Training Centre which is a well known education centre for world-renowned football coaches. Saltcoats derives its name from the salt harvesting industry and is part of the ‘Three Towns’ which includes Ardrossan and Stevenston. In the sixties and seventies, Saltcoats was a popular destination for Glaswegian holiday makers. The town would be extremely busy with families travelling from all over Scotland to go ‘doon the water’. Unfortunately, in recent years, a lack of investment and job opportunities has meant that Saltcoats is no longer as popular with domestic tourists.

Joseph Cullis is the Scottish Regional Chairman of bacta and Cullis’s Amusements has been a member since 1978. Looking to the future, Joseph is optimistic that the British public will take part in the regeneration of their seaside towns and realise their importance to our nation’s heritage.