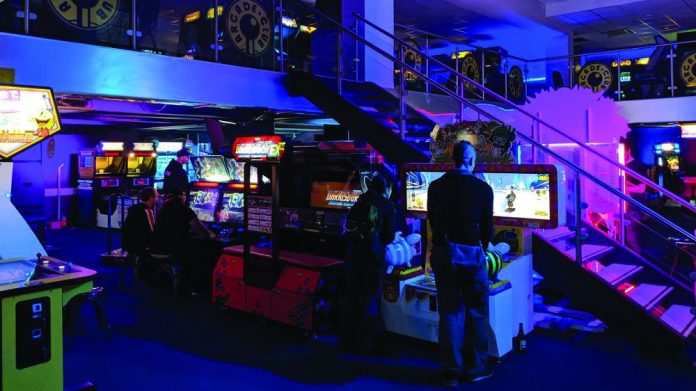 One of the largest independent amusement arcades in the UK has re-emerged from lockdown, with a raft of new Covid-mitigating policies in tow.

Arcade Club in Bury occupies three stories of former warehouse space and touts some of the best in modern and classic arcade entertainment, but was offline for four months as per government restrictions.

The space re-opened on Saturday with a new one-way system and temperature checks on entry, with owner Andy Palmer also stipulating his preference for customers to wear masks throughout their visit.

“We’ve got the social distancing guidelines from the government, we’ve got a one way system throughout the arcade,” he told Mancunian Matters earlier this week. “We’re doing all we can where the government has requested us to.”

Meanwhile, returning customers were quick to voice their enthusiasm at Arcade Club’s return. “I missed this place for so long,” said one. “Just for the atmosphere alone, it’s really nice to be back.”

“Coming back here is amazing,” said another. “It’s the perfect escape from everything that’s going on in the world.”

Arcade Club launched six years ago when Andy Palmer decided to share his extensive private collection of machines with the public.

Speaking about the early years, he told MM: “We had the pinball machines in the house, and we were dusting them more than we were using them.

“I wanted to do something with the machines where we could actually let people play them and enjoy them. “We set up in a computer shop. We charged ten pounds for four hours, and you got a can of coke or a cup of tea and some biscuits.”

From a small shop to a three floor premises,via national exposure on BBC2’s “Inside Out” programme, a gaming obsession has developed into an entrepreneurial entertainment hub where Pacman and Asteroids, in all their original classic cabinets, nestle up to new pioneering machines such as VR.

As Mancunian Matters apositely noted: Palmer’s vision has grown from “an impressive private collection into an interactive museum”.