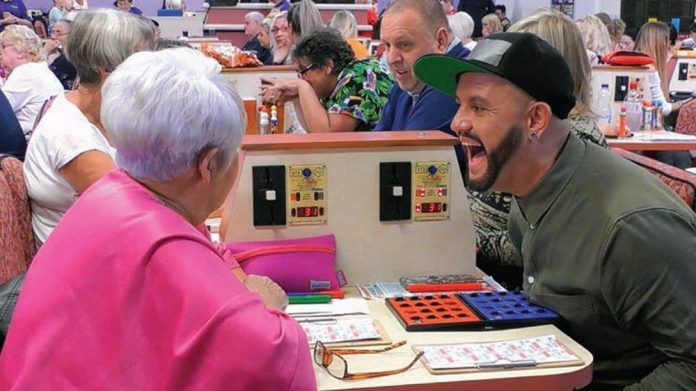 The bingo industry could be the subject of a national free-to-air tv series following a hugely positive response to a pilot featuring Majestic Bingo that was broadcast on BBC Wales last week.

Full House, a 60-minute ‘fixed rig documentary’, made by TV Production Company, Tuesday’s Child filmed during the summer of 2019 at the Majestic Bingo Club in Tonypandy – known to the locals as Judges – gained an outstanding 21 percent share of the available audience attracting rave reviews from viewers across main stream and social media channels as well as critical acclaim from tv professionals.

Series producer Jacci Parry, whose credits in a long tv career include iconic series First Dates and the Undateables, has been delighted at the response to a piece of work which aimed to take the lid off real people’s lives and in the process, create a piece of ‘television that makes you smile and think a bit’.

She explained: “The initial figures are really encouraging – to get 1 in 5 of the total audience watching is a great outcome. The response on Twitter, which provides personal context and flavour to supplement the viewing data, has been heart-warming and the next stage is to wait for the consolidated figures which will include the views on iPlayer. A pilot really serves as a proof of concept and if enough people love it, it will help us make the case for a network showing and subsequently for a series, which was always our original intention.”

Parry, a self-confessed lover of bingo having first played the game with her granny Gertie and members of her extended family during summer holidays spent in Southport, believes that as well as providing a safe, secure and fun place for men and women of all ages to be entertained, bingo also serves a bigger social purpose particularly in areas such as the Rhondda which has been hit by the loss of major industries and the subsequent economic fall-out caused by large scale unemployment.

She said: “Bingo is a social hub and what we have tried to capture in Full House is the sense of how communities come together and help each other out in what are tough economic times. Quite often it’s humour and a sense of belonging that gets people by and I think that’s true not just in the Welsh valleys but in communities across the UK whether that’s Sunderland, Glasgow, Manchester, Birmingham or in parts of London.”

The relationship with Majestic began in February 2019 when Jacci Parry met with Managing Director Mark Jepp and HR Director James Taylor. “I’d had some tentative conversations with other bingo operators which hadn’t got anywhere and I was fully prepared to make my hardest most persuasive pitch, but I didn’t need to,” explained Parry. “Mark and James got it immediately, set out a few ground rules mostly to do with not interrupting the flow of the game and we set about researching, meeting the players and of course the Majestic team who are a vital part of Full House.

“I knew that we’d made the right choice from the moment I first walked into the club. The staff get involved naturally and it’s the most powerful and genuine customer service because everyone knows each other from the community. I immediately felt that connection and generosity of spirit – the interaction with players was totally genuine and the words you hear broadcast were their own.

“Filming in a live bingo club represented a big learning curve for everyone. The central condition was that we didn’t interfere with the games – which we didn’t – and everyone was incredibly good allowing us what we needed in order to deliver a genuine and uplifting piece of tv featuring huge characters sharing their often very personal stories of loss, celebration, aspiration and crisis. Of all the programmes I’ve made I can honestly say this is the most fun I’ve had at ‘work’.

FULL HOUSE CAN BE ACCESSED VIA BBC IPLAYER. www.bbc.co.uk/iplayer/episode/m 000ly83/full-house

“I always make a point of exploring all of the ideas or approaches that we receive and when Majestic was contacted by a TV production company in the early part of 2019 we arranged to meet and hear a bit more about what was being proposed.

I understand why some parts of the industry may choose to adopt an ultracautious approach to requests to film but from my perspective I think it’s important to develop ideas that can promote bingo as fun, great value for money entertainment and help profile the Majestic brand in an ambient sense. We set out three main conditions which were: don’t criticise the product, don’t criticise our players and for heaven’s sake don’t get in the way of the games!

We held subsequent meetings to sketch out the format and most importantly which club to film in.

Again, the decision was quite straightforward. Our club in Tonypandy celebrated its 110th birthday in 2019.

The hall was opened by Queen Victoria’s daughter Princess Louise and the Duke of Argyll under the original name of the Judge Williams Memorial Hall – as a commemoration to the late Judge Gwilym Williams.

Over the years, it has held dances, snooker tournaments, concerts including Black Sabbath and hosted some 300 boxing events. Having watched on iPlayer a number of times the stars of Full House are undoubtedly the customers supported by the staff. 68-year old Philip McCarthy, our former manager who spent 52-years at the club, came out of retirement to host the celebration and the current manager, Adam Rowland, demonstrated what outstanding customer service really means.

I think Full House has not only created some tv stars in the making it has also delivered some classic one liners – my favourite being ‘What we talk about in bingo – stays in bingo.’

I’ve been touched to receive some great emails from colleagues within the industry and I agree with the view that Full House is probably the best tv programme ever made about bingo.”