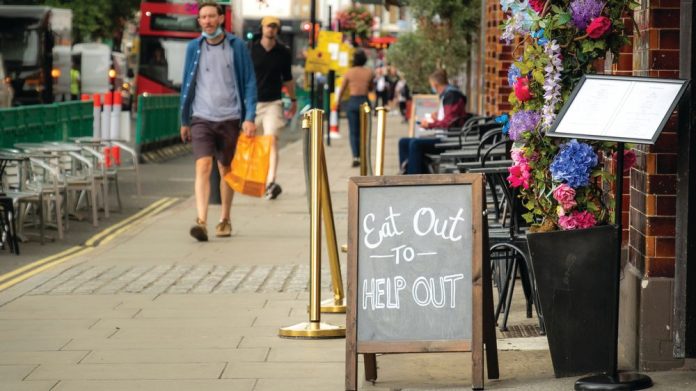 The government’s Eat Out to Help Out scheme is boosting seaside economies up to eight times more than it is in large cities, according to analysis by think tank the Centre for Cities – but Britain’s high streets still need more than just a recovery.

The government’s Eat Out to Help Out meal subsidies scheme is boosting the economic recovery of seaside towns at a much higher rate than big cities.

Analysis by think tank the Centre for Cities found that seaside towns like Bournemouth, Southend, Blackpool, and Brighton have all seen double-figure percentage increases in dining out on Monday to Wednesday so far in August. The early-week boost is not offsetting activity later in the week, meaning overall spending appears to be rising.

For the study, footfall and mobile phone data was analysed, measuring visits to the high street in the evenings across Britain. Some of the smallest increases were in larger cities such as Manchester, Sheffield, and London. London saw an increase of just 3 percent in early August, compared to a 23 percent jump in Bournemouth. The average increase across the UK was 8 percent.

“What we’re seeing is that small and medium city centres are seeing quite a strong recovery in terms of footfall and in spend, whereas large city centres and central London have not seen that recovery,” said Paul Swinney, director of policy and research at the Centre for Cities, adding that seaside towns were enjoying a particular boost thanks to the rise in staycations.

“We’ve had great weather recently and there’s obviously a nervousness about going abroad as well which means they’ve actually been able to pull more people in, from actually quite a broad distance,” he said.

However, while high streets of smaller and medium sized city centres are recovering faster, Swinney notes that the issues with high streets pre-Covid will remain.

“It’s great to recover back to where you were but if where you were isn’t a great place to be in, clearly there’s still a lot of work to be done,” he concluded.

MAJORITY OF PEOPLE SUPPORT EAT OUT TO HELP OUT EXTENSION

Compelling evidence has emerged of widespread support for an extension to the Treasury’s Eat Out to Help Out scheme, which has reimbursed participating establishments in offering diners a 50 per cent discount (up to a maximum of £10) on food every Monday, Tuesday and Wednesday throughout August.

A new YouGov poll of over 1,600 people found that 77 per cent of respondents supported an extension of the programme throughout September, with over a third (36 per cent) saying that a discontinuation of the scheme would lead to them dining out less. Meanwhile, UK Hospitality boss Kate Nicholls has added her own commentary to the finding, saying that any extension would be “incredibly helpful for the sector.”

Oh we do like to eat beside the seaside

Seaside towns have proved the biggest benefactors of the Eat Out to Help Out scheme, with some coastal resorts witnessing almost a quarter increase in footfall compared to July under the government initiative.

“Good weather and the Eat Out to Help Out Scheme have helped increase the number of visitors to city and town centres,” said Centre for Cities CEO Andrew Carter. “A question mark remains over whether the footfall increase that we have seen this summer can be sustained into the autumn without the good weather and Government incentive.”

Southend-on-Sea was another notable example of increased footfall, witnessing a 22 percent uptick, while Swansea and Blackpool saw restaurant and cafe customers increase by 19 and 18 percent respectively.

The increase has helped push bookings at registered venues up 27 percent compared to August 2019, according to statistics from OpenTable.

However, the positive impact of Eat Out to Help Out on seaside towns is particularly evident when compared to inner cities, with visitation in London increasing just three percent compared to the previous month.