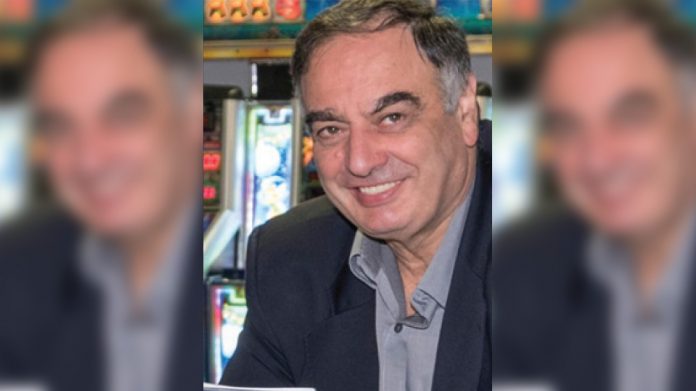 John Stergides, co-founder of Electrocoin and one of the best- known figures in the UK industry, reveals how a chance meeting in London diverted him from pursuing a career with the Cypriot Army and why taking calculated risks can sometimes be mistaken for stubbornness

My first paid job was in a Dragos arcade in Cyprus. It was after school and I was paid to clean the pintables and keep them in pristine condition. My wage was free games on all of the tables – the owner was happy and so was I, although I didn’t realise that it was a sign of things to come.

Is there something that you wish you’d been told before the start of your career?

For as long as I can remember I have always had an ambition and desire to be successful in everything that I do. Making something of your life requires immense dedication and is extremely hard work: but no one let me know quite how much!

I love challenges which sometimes entails doing the opposite of what other people might be advising – which can sometimes be mistaken for stubbornness. Obviously, this means taking some calculated risks because if it was obvious, everyone would be doing it and there would be no benefit.

There’s no doubt that I would have followed my career in the army. Prior to coming to London, I was a Second Lieutenant in the Cypriot Army working in bomb disposal. I stopped off in London for a holiday on my way to the United States where I was meant to be attending a training course. Within two weeks I’d spent all of my money and got two jobs to fund myself – one washing dishes and the other selling hot dogs. I then met Edward Conn who offered me a job working in the arcades in Old Compton Street and my career in this industry began.

I’m able to shut off any worries or concerns and the only thing that keeps me awake at night is my phone.

There’s two people. Firstly, Ed Conn but also Dave Rogers of London Coin. Both for their kindness and great insight.

I guess if you are going to make a mistake it may as well be a big one! Mine was turning down an offer from Mr Nakayama to have exclusive distribution rights for SEGA products throughout northern Europe as it would have meant dropping my other lines.

Undoubtedly, the best decision was starting Electrocoin as a 50/50 partner with John Collinson. We started on 26 April 1976 and I have to say it has been a wonderful journey spanning six decades and bringing me into contact with so many fantastic people.

Best piece of advice and from whom??

To follow your gut instincts, do your very best and to treat people with respect. It was from my father.

In my opinion, the main thing that’s missing from the industry is the triennial review of stakes and prizes. The review provides an opportunity for manufacturers to plan for the future and for operators to invest in the future. It frees games designers to be creative and it provides a structure to the business. The other issue that I would like to address is the unfair reporting on the industry in main stream media, much of which is completely unfounded and does a lot of damage to our reputation.