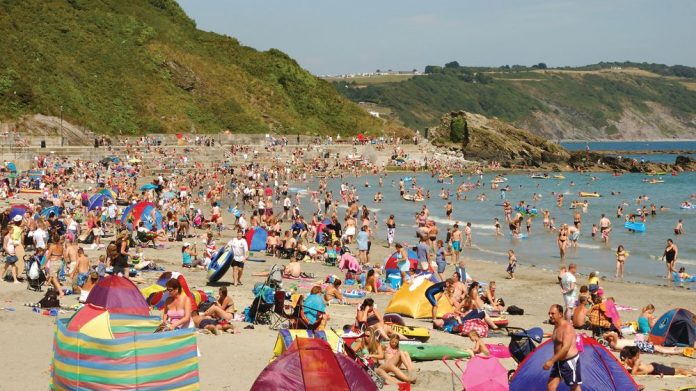 The UK’s beaches were packed with tourists on 31 July as the country enjoyed its third-hottest day on record, prompting local authorities to double up on efforts to keep visitors safe.

Beaches across the UK were packed with visitors on 31 July, as thousands of sun-worshippers headed to the coast to enjoy the third hottest day on record.

Though some locals expressed concern over the impossibility of social distancing amid the influx, local authorities welcomed the tourism – while ensuring safety remained paramount.

“We want people to enjoy their time here and it is more important than ever that people can visit Southend safely,” Southend Council’s business, culture and tourism member Kevin Robinson told The Echo.

“When temperatures soar, visitor numbers follow suit, and so we have our usual plans in place to deal with an influx of visitors.”

Those plans included Operation Heatwave, bringing together highways, parking, waste, parks, pier and foreshore, and the police in order to deliver a unified response effort.

However, even with highway teams on board, increased tourism saw many seaside resorts across the country fall victim to an age-old difficulty – traffic management.

“Car parks were full,” reported the East Anglian Daily Press, adding “heavy traffic was reported across Norfolk and Waveney in the rush to the coast.”

Though frustrating for visitors and residents, that constant stream of traffic proved positive for local businesses, with new co-owner of Clarence Pier in Lowestoft, Charmaine Mayne, telling the EADP “it is the hottest day of the year and we are very busy.”

Further north, The Sun reported that Scarborough enjoyed “packed sands” as temperatures soared, while “beachgoers flocked to the seafront in Blackpool,” after the Fylde coast resort “swapped its usual chilly winds for a tropical breeze.”

However, not all beach fronts were so idyllic, as down on the south coast Bournemouth Pier witnessed over 150 people start fires and engage in a large-scale fight near its main entrance.

“Shocked onlookers watched as scores of people ignored social distancing guidelines and got involved in scuffles on the hottest day of the year so far,” reported the Bournemouth Echo.

As more and more visitors crowded beaches up and down the country, it’s no surprise that Kent authorities urged visitors away from Joss Bay, Botany Bay and Viking Bay, while Rother Police reported Camber Sands was full, and Dorset Council encouraged tourists away from West Lulworth.