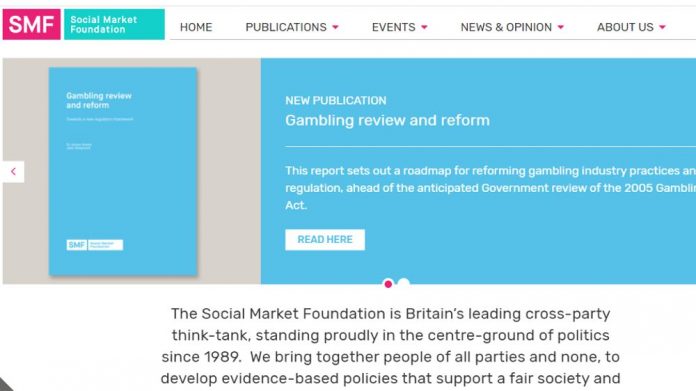 Another week and yet another report into how gambling must be controlled. This time it’s the Social Market Foundation, a cross-party think tank that prides itself on being in the centre-ground of British politics. A useful contribution to the gambling debate offering well intentioned objectives or the advancement of intrusive and invasive checks into personal lifestyles? It’s a tough call.

One thing is certain from this week’s latest contribution to the gambling debate; online gambling is in line for major reform. But if the broader based industry was hoping for some protection from the heat, the shopping list of the cross party group The Social Market Foundation casts very little shade.

Unveiled on Wednesday, the group’s contribution to the upcoming review of the Gambling Act puts forward a range of proposals that swing from the radical to the sensibly obvious.

At the one extreme – the intrusive end of the spectrum – is the appointment of a gambling ombudsman to undertake affordability checks on players, assess their household income and impose ‘soft caps’ on weekly gambling spend.

At the other more engaging end are initiatives such as the launch of a British gambling kite-mark and the introduction of a minimum ‘onshore footprint’ threshold for remote operators.

For dedicated swingers, Dr James Noyes’ report twists and turns around the gambling debate with an energy of…possibly unfinished business. Noyes was, after all, the former adviser to Tom Watson during his term as deputy leader of the Labour Party and the champion of reform to gambling legislation, up until not so many months ago.

And the report does carry the torch for protective measures very strongly. The group proposes that gamblers should be subject to affordability tests and limited to betting ‘£100 each month until they pass more stringent checks‘; that ‘£23 per week ‘ was a ‘socially acceptable’ betting limit for lower socioeconomic households;betting companies should request proof of a customer’s financial situation by using tax returns, wage slips and credit checks; information should be passed on to a Gambling Ombudsman to avoid players gambling with multiple operators.

At the same time, the group calls for the removal of all grey areas in terms of gambling licensing, a new categorisation of online gambling – similar to that applied to landbased machines – a review of gambling taxation and a new ‘Gambling Quartet’ which seeks to join the dots between the regulator, legislator, charitable groups and the new gambling ombudsman.

There is, however, little mention of the business itself and the protections it requires to develop growth and employment under a fair and balanced regulatory regime.

Not surprisingly, the cross-party group has made certain sectors in the industry cross.

The Betting and Gaming Council criticised the ombudsman affordability and spending cap initiative arguing that the industry already carries out “robust and improved affordability checks” adding that they “can think of no other area of the economy where the government determines how much an individual can spend.”

Talking to SBC News, industry specialist Dan Waugh expressed his concern at the direction of travel of the report. The Regulus Partners sector analyst told the website: “New limits on spending amounted to a ‘radical and intrusive approach to affordability and one that risks being accompanied by downwards only reviews’.

Whilst focus of the Social Market Foundation’s contribution was clearly on the remote and online sector, the land-based industry will inevitably face the fall-out. Bacta gave a cautious response to the report stating: “Bacta welcomes this additional contribution to the debate around gambling in advance of the Gambling Review, expected to start in the Autumn.

“Whilst this report essentially proposes measures for the online sector, Bacta is keen to ensure that any changes recommended by the Review are proportionate and relevant to the requirements of society and the industry for the 2020’s. This must include alongside any enhanced social responsibility measures, changes that remove the outdated and irrelevant parts of legislation devised 15 years ago. For example, customers should be allowed to choose how they wish to pay for their entertainment as long as it presents no risk to the vulnerable. They should not be forced to use cash, which is, in this Covid-19 world, declining further as a preferred payment option by consumers.