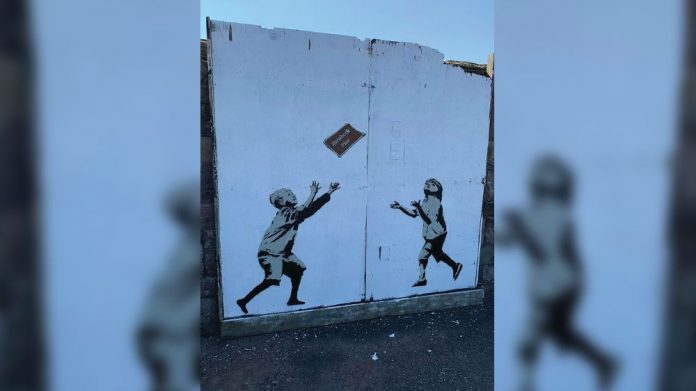 The appearance of a potential (if doubtful) Banksy work near troubled Birnbeck Pier caught headlines momentarily…before it was stolen less than 24 hours later.

A mysterious piece of street art, similar in style to the works of iconic guerrilla street-artist Banksy, appeared briefly near the entrance of dilapidated Birnbeck Pier in Weston-super-Mare last weekend… only to be apparently stolen the very next morning.

First spotted on Friday morning, the mural in question depicted two children appearing to throw an object labelled “Birnbeck Pier” between themselves. The piece had been painted onto some old boards close to the entrance of the pier itself – which is currently the cause of an ongoing dispute between owner CNM Estates and the local authority due to its poor state of repair.

But just as suddenly as it appeared, so too it went away – disappearing (along with the boards themselves) by Saturday morning in what has been thought to be a theft.

But local legislators don’t seem to be overly perturbed by the absence of the new work: as opinion both online and amongst experts is that the Birnbeck piece wasn’t the real deal.

“This is the site of the Banksy that never was this morning, as it was quite obviously a hoax,” North Somerset councillor Mike Soloman told Somerset Live. “My guess is someone thought it may be of value so took it…but it’s painfully obvious that Banksy wouldn’t paint on a hoarding that could be so easily removed and in such a poor location!”

Hoax or not, it was interesting timing for the mural to make its (albeit brief) appearance at Birnbeck: coming just a week after North Somerset Council offered to purchase the pier, which has been closed to the public since 1994, for the sum total of £1. The lowball offer was made in a final non-litigious attempt to gain control of the pier off of CNM, who are on the receiving end of a Compulsory Purchase Order lodged by the authority. Indeed, council leader Don Davies has gone so far as to say that he was willing to “deliver the pound coin personally myself if that makes it any quicker.”

And indeed, the confluence of the mural’s appearance alongside the pier’s ongoing controversy was sufficient to spark some speculation amongst locals as to the fate of the new artwork.

“I thought maybe it was a fake or taken down maybe due to the controversy surrounding the pier,” mused local Rosie Hartshorn. “There were a lot of people around looking for it and disappointed to see it had been taken down.”

From Banksy to Boey

Whilst Banksy (or a knock-off version of him) was busy this weekend over at Birnbeck in Weston, so too was an aspiring artist making his presence known, albeit in a slightly less impressive manner, at the newly re-opened Hastings Pier. The attraction’s new management posted photographic evidence of “Boey’s” handiwork in the toilets on social media: adding that it had been by no means his first artistic outing whilst visiting Hastings.

“Boey, thanks for tagging all the toilets, tables and the decking on multiple occasions over the last few weeks, you are obviously very talented [and] I hope your family are very proud,” read the post. “Your actions are very disrespectful to all of us that love this pier.”

The comments section was full of lively opinion as to Boey’s artistic abilities. “It’s shit,” wrote one popular user. “They should punish the little fuckwit by sending him to an art class.”