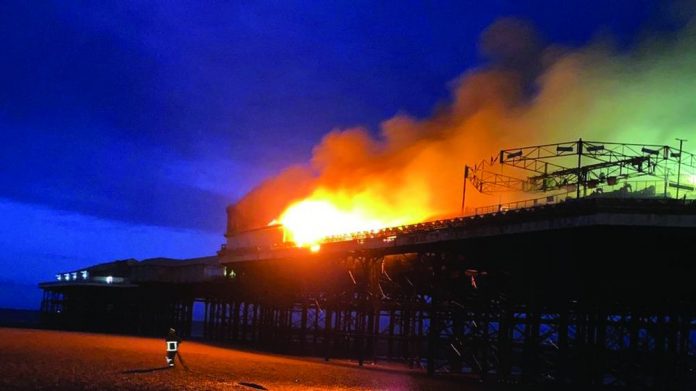 As if 2020 couldn’t get any worse: a fire on Blackpool’s iconic Central Pier has forced most of the attraction to close to the public..less than a week after emerging from lockdown

Just a week after it re-opened, Blackpool’s Central Pier has been forced back into closure after a fire on the boardwalk destroyed the attraction’s much loved “Waltzer” ride.

Management at the pier spoke of how the timing of the accident had come as “a massive blow,” after a blaze in the early hours of Friday morning claimed the Waltzer and rendered the rest of the structure temporarily unsafe before fire crews were able to get a hold on it.

“The fire was extensive and quickly took ablaze to the iconic waltzer ride and pier workshop area,” read a statement posted to the pier’s Facebook page. “The fire crews valiant and methodical effort contained the fire to a minimum… [and] a low tide and moderate wind speeds greatly attributed to preventing the fire from spreading further.”

The statement added that the pier owners were “devastated” by the incident, but were nevertheless “thankful that nobody was hurt.”

Speaking on behalf of the Blackpool Pier Company, Mark Marshall told the BBC that whilst the pier’s arcade would remain open as well as the outdoor Terrace Bar, the rest of the pier would remain closed (again) to the public whilst a structural engineer assessed any prospective long term implications on safety.

“We’re hoping with every fibre of our body we’ll be open again soon,” he remarked.

Nevertheless, an update posted by pier management on Friday evening gave no further indication as to when visitors might be allowed to roam freely on the pier.

“Having only just re-opened from being closed due to Covid-19, [the fire] is a massive blow for us as we were gearing up for the summer season, however the safety of our customers and staff is our priority so we need some time to clear up the devastation the fire has caused,” said a spokesperson. “We hope to be back open soon…further updates to follow.”