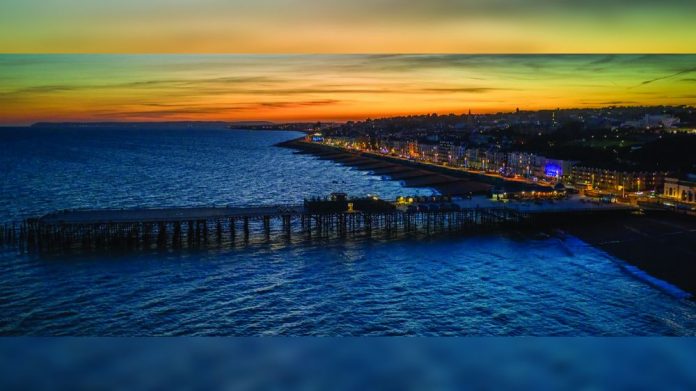 Whilst retaining ownership, Abid Gulzar has stepped back from his high-profile managerial role which brought Hastings Pier back from the brink, and in a bold move, handed over the reins of its operation (for now) to fresh blood.

Hastings Pier has held out an olive branch to local residents and is attempting to turn over a new leaf, as it prepares to transfer day-today operation of the attraction (at least temporarily) to a fresh pair of hands.

Since taking the pier out of administration with a private purchase agreement in the summer of 2018, the pier’s owner Abid Gulzar has been the focus of ire and resentment from certain vocal quarters of the local authority and press: who have decried virtually anything and everything he has attempted to do with the business – from setting up new decorations to daring (shock horror) to establish a new amusement arcade on site.

It was a programme that literally saved the pier from bankruptcy, and whilst praise was valid, it was also grudging. Taking the hint, Gulzar now appears to have handed over the reins at Hastings to a business calling itself Music First Events, which throughout the past few weeks was cleaning up the boardwalk (officially closed since March) for a re-opening on July 6.

The new operators, identifying themselves only as James and Mustafa, revealed their new handling of the prize-winning pier in a post to the attraction’s official Facebook page last week, which struck a notably conciliatory tone with its former detractors.

“We feel it’s time to forget the past and move forward positively,” they wrote. “Our aim is to offer the space back to the local community, [so] if you have a group that needs space, if you have a passion you wish to share with the world, or if you need a platform to showcase your talent – contact us!”

The pair even took the step of unbanning the small army of passionate locals who had previously been the source of much criticism of the pier on social media.

“We shall engage with all, your constructive criticism is most welcome but we cannot and do not intend to be all things to all people – it’s just not possible,” they remarked. “We welcome you back, your opinions matter, but please play nice.”

The two men added that whilst their present tenure would extend to the end of the 2020 summer season, they would continue at the site “if successful.”

Encouragingly, the injection of fresh blood appears to have gone down a storm amongst even some of those once counted as amongst the pier’s most vehement enemies.

“I think what you are doing on the pier now is very exciting,” wrote one. “Your vision is exactly what’s needed and matches what the space was designed for with the reconstruction.” “You have massively improved the pier in such a short time,” added another. “Keep up the good work.”