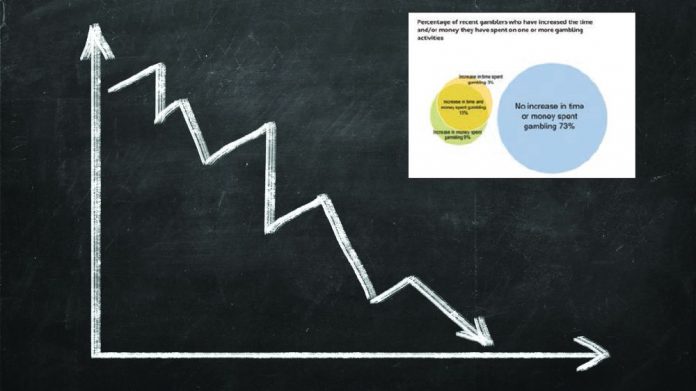 The Gambling Commission had to grasp at straws to find a gloomy angle in its latest round of survey data, which tracked dwindling numbers of player accounts online throughout both the first and second months of lockdown. Whilst it keeps the record straight on gambling in the UK, it doesn’t shift the dial on the negative narrative spreading across both the online and, more worringly, land based sectors.

Fresh data from the Gambling Commission pertaining to remote betting and gaming trends throughout the period of lockdown tracked a continuation of reduced overall participation throughout the month of May – despite alarmist rhetoric from the regulator.

Figures released last week suggest that after the number of active online betting and gaming accounts fell by over 5 per cent from March to April (just as lockdown was coming into effect), the total number of accounts continued to fall yet further (this time by 1.2 per cent) throughout the following four weeks, despite Britons being largely confined to their homes.

Small surprise that rather than celebrating this fact, the Commission did its best to find an appropriate vector within the data over which it could wring its hands – which it found in the form of a 17 per cent increase in average player spending from April to May. But even by the regulator’s own admission, this discrepancy was a product of the virtual elimination of live sports betting in April (due to the cessation of live fixtures throughout the world), contrasted with an uptake in May due to the resumption of the German Bundesliga.

However, the latest raft of numbers do continue to bear out the Commission’s narrative that those players it considers to be “engaged” gamblers increased both the amount of time and money they spent on certain gambling products – albeit, again, hardly surprising considering the country was in lockdown and house bound. The numbers also show a substantial increase in the amount of “reverse withdrawal” requests (where players continue to gamble with their won proceeds rather than immediately cashing out) in May: an option that the regulator decreed should be prohibited from June onwards. Indeed, the degree of uptake in reverse withdrawals between April and May exceeded 25 per cent. And if that’s a figure which seems suspiciously high then it probably is: for the regulator also fessed to the fact that due to “different methodology” deployed by one operator to calculate its own share of reverse withdrawal requests, the overall result compared to April was likely “inflated.”

That didn’t stop good old GamCom from giving itself a pat on the back for taking action on this front, of course.

“The data gathered throughout May showed significant usage of operator reverse withdrawal functions, suggesting that the Commission’s updated guidance was both appropriate and timely,” said a spokesperson. “It will ensure consumers are better protected from harm during the lockdown period.”