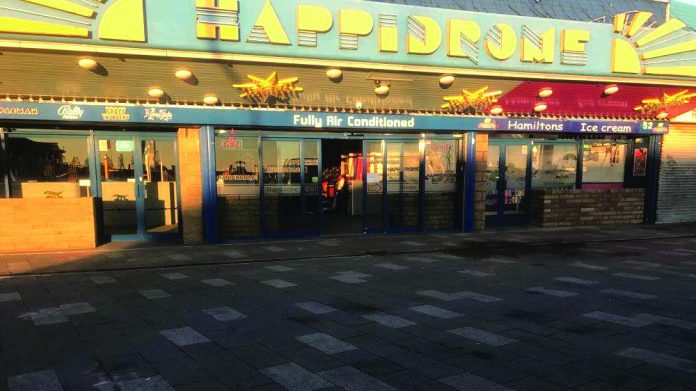 Two high profile operators, Martin Richardson in Southend and Reece Holland in Whitby, have elected not to open just yet. They explain the rationale behind a very difficult decision.

July 4 may well have been independence day from lockdown for many arcades throughout the UK: but not all.

Just a few days before the government mandated closure order was lifted, Martin Richardson, who owns the Happidrome Arcade in Southend, posted on social media that he and his team members had come to the “very hard decision” that it was not yet safe enough to welcome back customers to the premises.

“After deep thoughts and many hours walking the arcade f loor, even repositioning many of the machines and removing some of them too, we have come to this very hard decision… as we do not feel we would yet be able to open safely for both staff and customers,” he wrote on the arcade’s Facebook page. “Sorry to disappoint all my customers, but your safety is more important.”

Richardson reassured customers that the business would “still be here when we all feel it’s safe to open,” and said that his staff would continue to operate Hamilton’s Ice Cream as a takeaway service.

By and large the public were supportive of Richardson’s decision.

“A very hard and admirable decision,” commented one user, with another adding, “hoping it wont be too long until you can open, my boys will love to come back again.”

But being the internet, the post did receive one or two negative remarks, including one which simply read “your loss – all the other arcades in Southend will be open.”

In Happidrome’s case, the decision not to open is a brave one. But it is only a short term one. Whilst deferring a date to re-open, Happidrome is still on the recruitment trail advertising for two new members of staff, ironically on the same day as it confirmed its reopening deferment. Happidrome’s judgement call is certainly not impeding the arcade’s commitment to invest in both the business and the local economy.

To open, or not to open? That is the question, says Holland

The first phase of easing lockdown coincided with some timely fine weather throughout much of Britain, sending thousands of people flooding to the coasts a few weeks ago.

But despite the surge in footfall to coastal resorts, one arcade owner – who has opted to remain closed for the time being – has voiced scepticism as to whether he’ll be able to break even whilst maintaining the government’s rigorous new guidelines.

Speaking to his local newspaper the Yorkshire Post last weekend, Bridlington FEC operator Reece Holland confirmed that the seaside town had seen “one of its busiest ever days” on Saturday. However, he said the prospect of higher-than-average trading still had to be weighed against the price points presented by actualising more than 40-pages of government health guidelines on site.

“Everyone thinks as soon as you get the green light it’s fantastic and money will be coming back in,” he remarked. “But I’m actually concerned now that, as soon as we open, there’s going to be that many procedures we have to put in place that I might actually lose money.”

“At the moment, although I’m not earning any money, I’m not losing money,” he went on. “The day those doors open, I could potentially lose money because I need to take my staff off furlough and all the bills start up again.”

It’s an argument echoed by many arcadians around the country, reflecting the commercial gap that is stubbornly widening as the government struggles to keep pace between supporting business and repairing the economic damage. For the likes of Holland, however, the current price of complying with Covid-19 remains higher than the value of containing it through closure. And that’s a message chancellor Rishi Sunak needs to address very quickly.