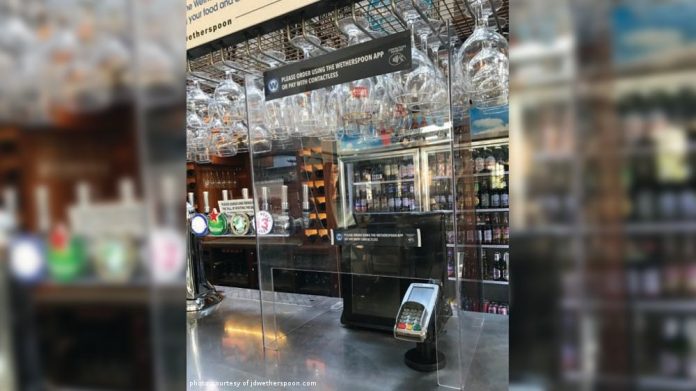 It’s fair to say the government is not moving with haste on the issue of re-opening pubs. The heart of the British high street is standing at the back of the queue at the moment, but that isn’t stopping pub giant Wetherspoon from splashing the cash for when the doors finally open.

JD Wetherspoon, which has the highest AWP count in the pub sector, has unveiled a minimum £11m investment programme covering its 875 pubs to ensure that it is on the front foot in preparation for the government’s third phase of lockdown restrictions scheduled for July.

The vision, which has been described as providing the most detailed picture of the post-lockdown pub, includes a range of precautionary measures including: the provision of gloves, masks and goggles for staff; protective screens both at the till and between tables; ten hand sanitiser bottles per venue; staff training on how to handle glasses in the most hygienic way; condiments supplied in sachets and perhaps most controversially, daily health checks on employees including questionnaires and the use of digital thermometers.

The emphasis on providing additional dedicated staff represents the cost centre of the proposals, with the pub giant specifying a minimum of two per pub and whose job it will be me to disinfect surfaces, handles and handrails. Staff will also monitor each pub’s dynamics to ensure social distancing is being maintained with the intervention of protective screens for use in more densely packed areas. Although the chain has said that cash will still be accepted, customers will be encouraged to pay with contactless cards and to order food using the Wetherspoon app.

Wetherspoon chief executive, John Hutson, told media: “We have spent a number of weeks consulting with staff who work in our pubs, as well as area managers in order to draw up our plans. We have received more than 2,500 suggestions from our staff. At present the government have not confirmed any reopening date for pubs. However, it is important that we are prepared for any announcement. The safety of our staff and customers is paramount.”

The fact that larger premises have a big advantage in terms of adhering to the government’s social distancing protocols plus the emphasis that’s being placed on the utilisation of outdoor space such as pub gardens should put Wetherspoon’s at the front of the list of operators most likely to be fast tracked for a proposed July 4 reopening. The average footprint of a JDW pub is 4,000 sq ft, with 700 (80 percent) boasting a beer garden, roof terrace or patio.

Whilst Wetherspoon addresses the ‘new normal’ from the perspective of a group which has the luxury of space, but for others, the government’s two metre safe spacing guide is proving to be an issue, not just in the UK but around the world.

Brewdog has emphasised the impact of social distancing using both the one and the two metre measures. According to Brewdog its’ premises in Oslo where the WHO one metre definition is applied, regained 50 percent of turnover in the opening week of Norway’s lockdown restrictions being relaxed, rising to 80 percent in week two.

Modeling undertaken by the company suggests that the UK government’s preferred two metre rule would result in a recovery position of 40 percent of turnover with one metre seeing venues bounce back to 70 percent of the pre-lockdown figure.