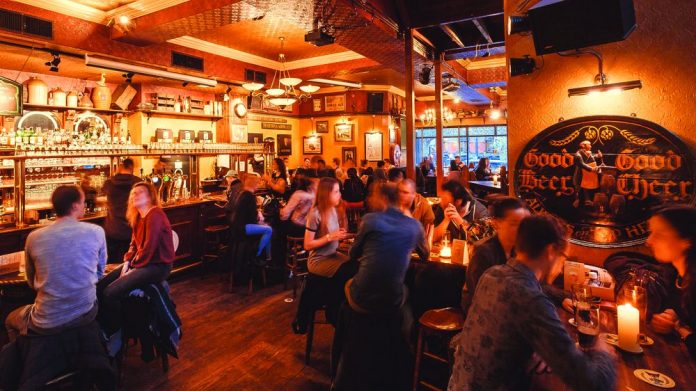 Looking ahead to a prospective partial reopening in July, publicans are skeptical as to the feasibility of enforcing the government’s current two-metre social distancing guideline. So, what’s a few centimetres between friends? Quite a lot it seems.

With six weeks until the July 4 milestone proposed by government for the relaunch of certain pubs and restaurants, publicans have been mulling over the implications of mandatory Public Health England (PHE) guidelines – which the state says must be adhered to as a condition of re-opening. Despite other European countries such as Denmark having now relaxed social distancing measures by lowering the recommended “safe” distance from two metres to one metre from anyone outside a person’s immediate household, the UK has yet to do so – leaving pub operators under the impression that they will be forced to institute intense distancing procedures in order to comply with the government mandate.

UK Hospitality CEO Kate Nicholls has openly questioned the feasibility of maintaining more than sixfeet between friends and strangers alike in the vast majority of British pubs, arguing the prospect is “possible, in theory…but who knows how that will look in practice?”

“Pubs are all different shapes and sizes and with different layouts so there is no single plan we can apply to the entire sector.”

Indeed, such was the level of differential between individual sites, that Nicholls held that any wide-scale re-opening effort would have to be “bespoke and will take no small amount of lateral thinking to produce.”

Other voices within the pub trade have been less diplomatic. As reported by the Morning Advertiser, head of the British Institute of Innkeeping Steve Alton said that the very concept of the pub is “the opposite of social distancing.”

“Our venues are designed to provide the opposite of social distancing and each pub is unique in its layout, space, and location,” he remarked. “Social distancing in any business will be challenging, but in hospitality particularly, the plans and procedures that will need to be put in place are huge in number and complexity.”

And it’s not just the management of punters that is causing brows to furrow within pub circles: the provision of bar staff has also been flagged a major problem, particularly at smaller sites.

“I would only be able to have one member of staff behind the bar as it would be impossible to keep a two-metre distance with more than one person working,” Justin Lorriman of the Royal Dyche in Burley told the Advertiser. “I would have to cut staff hours or find other roles for staff members that could help us operate more safely and efficiently.”