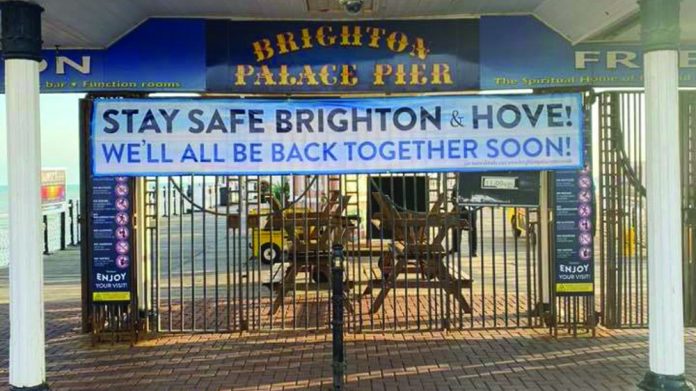 Coastal communities have taken different tacks in reopening their respective seafronts, with a confused message from government seemingly allowing a number of paths towards the “new normal”. Coinslot journeys the south coast round to the east and discovers that there’s nothing normal about local policy to re-opening.

The stark differential between how individual businesses and local councils are approaching post-pandemic business re-openings was made abundantly clear this weekend, with certain seaside piers permitted to cautiously welcome back visitors, and others remaining stubbornly closed.

One attraction taking advantage of the relaxed lockdown measures was Worthing Pier, which instituted a new one-way system to help piergoers adhere to social distancing standards.

“Visitors to Worthing Pier are being asked to follow a new one-way system to ensure social distancing is maintained,” said a spokesperson for Adur and Worthing Council.

Ironically, a little to the west – 16.5 miles to be exact, the winds were very different; a sure sign that not all is consistent along the southern coast of England – the neighbouring Bognor Regis pier was shut.

The dust that accumulates from closure had clearly by-passed Worthing, yet further along the Sussex shoreline to Brighton it was a different story entirely. The Palace Pier remained closed despite the revised lockdown measures – which Brighton Pier Group CEO Anne Ackord had criticised for having lacked specifics.

“We had been hoping for more detail and a closer potential opening date so that we can reassure our teams that they will be back to work and make firm plans to create a safe environment within as yet unspecified parameters,” she told the Brighton Argus last week, adding pier staff were “still in the process” of making the necessary adaptations to ensure a safe return to trade.

Over in Essex however, and there has been a limiting re-opening of food and beverage outlets on both the Clacton and Southend seafronts. In Clacton, pier management said they would be taking their “first tentative steps back into business” as of this week, with plans to re-open its Candy Corner kiosk on Wednesday.

“It’s a step in the right direction, albeit a very small one,” said the pier’s owner Billy Ball. “We are starting to look ahead to when other parts of the business can re-open.”

In Southend it was a similar story: with the main pier still shuttered (until July, according to the town council), but with ice-cream and candy-floss outlets trading for the first time this year. Indeed, such was the degree of trade at Martin Richardson’s seafront ice-cream booth, that the Happidrome owner attracted the notice of the national press: and gave interviews to both the BBC and ITN news.

Finally, prospective seaside visitors near Cromer could only lick their lips at the prospect of an ice cream. They had to satisfy themselves with a couple of old car parks that the North Norfolk District Council saw fit to bestow on them, after decreeing it was too early for Cromer Pier to open shop.

NNDC council leader Sarah Butikofer said the decision had been taken “not to open our seafront,” but insisted her and her fellow councillors would be “reviewing the situation daily.”