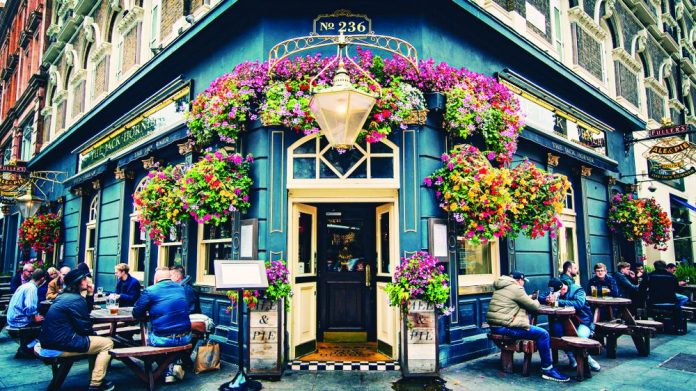 Should they meet social-distancing standards, certain boozers could welcome punters back through their doors by July 4, according to the government’s latest timetable. But eight weeks is still a long way off for a beleaguered pub sector, and that’s without income and the costs of implementing new compliance measures for a reduced capacity of business.

In what has been touted as some long-awaited good news for the shuttered pub sectors, the latest government guidelines could permit for certain pubs to re-open as early as July 4 – given they meet all requisite social distancing pre-requisites.

The guidance was revealed as part of Boris Johnson’s “road map to re-opening” address to the nation on Sunday, and carried the proviso that should the rate of infection suddenly climb once again, then the government would “put the brakes on” the outlined schedule.

“The ambition at this step [on July 4] is to open at least some of the remaining businesses and premises that have been required to close, including personal care, hospitality, public place and leisure facilities,” reads the government’s strategy document, which was released in conjunction with the prime minister’s speech. “Some venues which are, by design, crowded and where it may prove difficult to enact distancing may still not be able to open safely at this point, or may be able to open safely in part.”

The document goes on to claim that “the government will wish to open as many businesses and public places as the data and information at the time allows.” Speaking on behalf of the sector, the British Beer and Pub Association’s, chief executive Emma McClarkin spoke highly of the decision to permit certain qualifying pubs the opportunity to grab something of the summer season, but highlighted the fact that many publicans would not be in a position to meet social-distancing specifications in such a short timeframe. “We are pleased to see pubs included as part of the possible re-opening of the hospitality sector in July,” she remarked. “This would be great news for those pubs who can meet the social distancing measures required by then.” “We believe pubs should only open when safe to do so, but without additional support now – particularly for those who won’t be able to re-open sooner – many more of our nation’s pubs and the brewers that supply them with beer will struggle to survive closure and beyond,” she continued. “I urge the chancellor to announce more support for our pubs and brewers to see them through to July and beyond.”

And that remains the key issue: money. Where the government leaves pub machines, for example, is a vital factor too. An important contributor to pub takings – as the growth in machine income at Wetherspoons has shown – remain a grey area in the pub un-lockdown. Playing protocol will require definition for those inner city and town high street pubs without significant outdoor space that remain open, and those pubs with gardens may even consider closing the inside areas down. July 4 may not be everyone’s day of independence.

Obviously the major obstacle facing any pub or hospitality business eyeing a prospective re-opening is the limitation of space at any given premises – as anyone who has ever been to a hole-in-wall London boozer will well attest. But as covered by The Sun earlier this week, one prospective way to get around government- mandated social distancing policies could be for pubs to temporarily relocate outside: supplying punters at safe distance in nearby streets and/or fields.

Tourism Alliance director Kurt Janson has proposed just this very solution, telling the tabloid that local councils should waive bureaucratic licensing and planning red-tape, and allow shop owners and publicans the chance to regain some of their lost business. “The urgency of the situation should let shops look at having outdoor seating areas, or you could change planning rules to shut down streets in the evenings,” he said. “Pubs could open back onto fields, especially in rural areas, and use farmers’ fields to increase the footfall.”