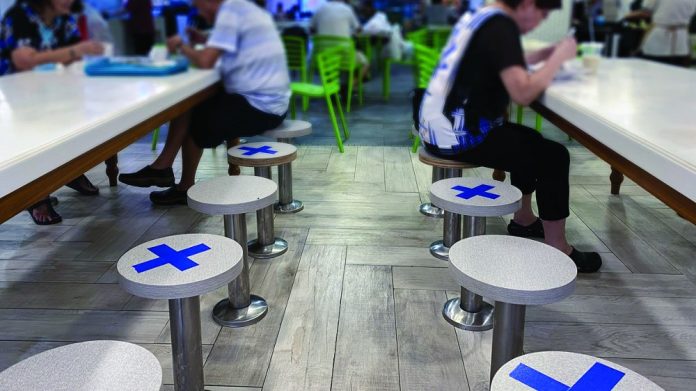 Social distancing could take jobless total to 7m but will government help industry to comply with the new normal?

Social distancing could result in a fall in GDP of up to 24 percent in 2020, according to economic modelling conducted by independent think-tank, The Resolution Foundation. The size of the fall is in proportion to the duration social distancing is in place with three months leading to a 10 percent drop and six months a 20 percent downturn. Falls of such a scale have not occurred in the UK for more than 300- years, claims the Foundation.

With social distancing estimated to reduce economic activity by approximately one-third, the impact on unemployment is profound. Under a three month scenario UK unemployment peaks at 2m, rising to close to 5m after six months and to over 7m in a 12-month scenario, a total which is the equivalent of more than 20 percent of the workforce. In the UK, workers in the hospitality and retail sectors are said to be most at risk of losing their jobs with the Resolution Foundation estimating that nearly 50 percent of the workforce could be furloughed. A separate report conducted by McKinsey Global Institute paints an equally bleak future predicting that 26 percent of the 230m employees across the EU and the UK could lose their jobs as a result of the pandemic, a figure that would double pre-pandemic unemployment.

The role of social distancing in determining the extent and the pace of recovery for the low stake gaming and amusements sectors is critical. “Social distancing, the requirements placed on the industry and the flexibility of existing regulations are absolutely key,” confirmed an AGC operator who has been planning how his business will look since he pulled the shutters down in March. “When we eventually get the green light to re-start the business there will be conditions that we will have to abide by and I’m certain they will revolve around social distancing. How we implement it is another matter and I would like to think there could be a change in the 80/20 rule which would enable us to give our customers the space the government will insist on and that customers are likely to expect in what everyone is predicting will constitute the new normal.”

Experts are predicting that consumers having become accustomed to crossing the road to maintain their personal space and no longer shaking hands to greet friends will be far more cautious and more exacting in a post pandemic world. Nigel Pearson, a leisure analyst at Canaccord Genuity who confirmed that restrictions for pubs, restaurants and the broadly based hospitality sector are likely to be the last to be lifted, stated: “It (the recovery) depends on the levels of social distancing measures that customers are prepared to tolerate, which could include bigger spaces between tables, a shift to disposable menus, cashless payment and more rigorous cleaning regimes.”

The industry has consistently displayed an ability to innovate and respond to consumer demands – however, the question is when it comes to the big issues such as cashless and the 80/20 rule, does the regulator or government have the flexibility, the imagination and the ‘can do’ attitude necessary to enable such initiatives to take place even if it’s a question of economic life or death?