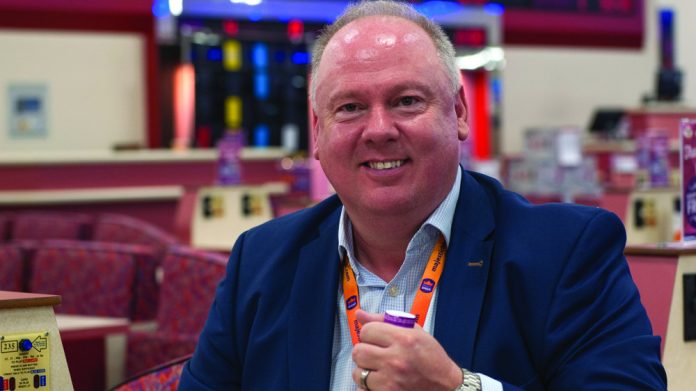 If Mark Jepp had followed his instinct and signed-up to join the RAF his life would have been entirely different. Instead Majestic Bingo’s ‘high flier’ explains his love for the industry and how his career helped him see the code behind the curtain.

What was your first paid job?

I was an apprentice for a construction firm in Melbourne, Derbyshire and even won an award for a stone wall I built 30 years ago! I decided to leave for the RAF but after getting married I wound up in an amusements centre and the rest is history.

What do you wish you’d been told before starting your career?

It’s been an unorthodox career for me so far and despite falling into the industry by accident, I’ve loved it and wouldn’t change what I’ve done. Saying that, I wish I’d got onto the property ladder a bit earlier.

As I said I passed the exams to be in the RAF but I can’t see me having done anything other than this. I was meant to be in gaming as I genuinely do feel like a bit of an artist working in this industry as I’ve always been able to see the code behind the curtain. I would have worked hard in other fields other fields but I don’t think I’d have excelled in the same way without that vision I have with gaming.

Terry Mcilvenny. Not only is he a true industry legend for his work at Rank and other companies, but his support when I first got into Bingo was invaluable. In addition being given the opportunity to head up Mecca’s Machines Operation by Ian Burke was pretty momentous too.

I work long hours so I’m not a bad sleeper but if I do have a sleepless night it’s probably to worry about my grandchildren and their futures. Also, I’m concerned about the overall impact of this pandemic as I want to ensure a strong future for not just bingo, but the industry as a whole.

I don’t regret much as you can only judge from where you are now, However, I once worked at a business wit a poor culture and tried to fit into it and act unlike myself which backfired. Always be yourself!

Calling entrepreneur Luke Johnson about the Majestic Bingo idea. I had worked at Riva before he sold it and took the chance to reach out to him years later. He jumped onboard backing our initial seven clubs and we’ve added nine more since then.

Best piece of advice & from whom?

Terry Mac once told me to, “take on awkward stars, not nodding dogs” which has steered me away from sycophants and ensures I am not the smartest man in the room. I also keep thinking of Ian Burke pointing out how everybody wants investment and money to spend but “make the best of what you’ve got”, which is especially prescient right now when as an industry we need to embrace what we have.

If you could change one thing about the industry what you do?

I’d love to find the key to merging traditional bricks and mortar bingo and digital together space. I’m a big fan of retail but we can’t be blind to online. I would also establish a Triennial Review process to start fresh and allow manufacturers to inject new, exciting products to the sector. We’ve almost had to be apologetic since being mixed up in the FOBT debacle, so the entire UK industry needs to be able to get back out there and wipe the slate clean!

For more information on Blueprint’s full range of high performance B3 and Category C gaming equipment including the new Alphamax and Wave cabinets, visit: blueprintoperations.com or contact Head of Corporate Accounts, Nicola Wallbank on nwallbank@blueprintmachines.co.uk