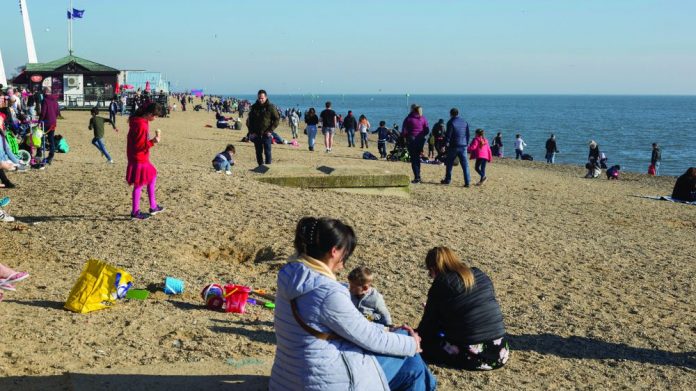 At any other time it would be a welcome sight, but large crowds gathering at the seaside and elsewhere across the country, contrary to government advice, apparently steered the UK down only one path: Lockdown. So, how did this journey unfold?

It was the sight of thousands of Brits still visiting the seaside, despite government warnings to avoid social gatherings, that turned a hissy fit into an outrage, then into a media and social media finger jabbing assault at the public, which eventually turned into a government edict for lockdown.

Last weekend, images of crowded beaches in some of Britain’s most popular seaside resorts sparked outrage across both traditional and social media, with a standard bete noir, amusement arcades, accused of remaining open and putting the nation’s health at risk.

The fact that the key image used by national media and shared across social media was not actually taken at the weekend, nor the weekend before, but actually five years ago – well, that’s all apparently irrelevant.

At the centre of this somewhat hysterical reaction was Skegness operator Walter Sheeran who was more shocked than anyone to see his own arcade welcoming hundreds of visitors at the weekend in the national press.

Shocked best sums up the Sheeran family experience which has undergone considerable aggression on social media.

The problem was, Mr Sheeran’s arcade was closed. In fact, it was shut within an hour of Boris Johnson’s declaration last Friday of the need to close leisure and entertainment venues.

The photograph used by the media was taken five years ago during a busy summer holiday weekend in Skegness. It wasn’t taken during a Covid-19 virus pre-lockdown weekend outside the Sheeran family operation.

But, it’s ok now?The papers have taken down the picture and, grudgingly, apologised, and the social media abusers, well, there’s no apology coming from that quarter.

Except it’s not ok. Especially for an industry that operates on the right side of circumstances, rather than the position it’s allocated by the anti-gambling lobby.

The truth about this weekend in Skegness, and around seaside resorts and inland towns throughout Britain, is that the entire operational membership of Bacta – those very arcades accused of being open during the weekend frenzy-were actually closed; a very important fact, conveniently dismissed for those peddling their ire.

For a sense of that stupidity, one elected official in Skegness, local councillor Jimmy Brookes, was a good example of the wave of irresponsible ignorance: it was “madness,” he said, adding: “Skegness is packed, cafes and arcades are open.”

The arcades were closed, which is a fact that suggests Mr Brookes should either have known or just shut up himelf. After all, Mr Brookes is, one must assume, being paid his salary without any concerns as to the fiscal impact of Covid-19. That is not the same position that those very arcades he wrongly attacked are feeling in this current situation. They followed government guidance instantly and closed the day before the country fled to the seaside for some final respite. They are likely to remain closed without any income for the foreseeable future.

For Walter Sheeran, what’s important to note was that all Bacta members were instructed to shut their doors, along with pubs, betting shops and casinos, by last Friday.

The problem was not the arcades, but the local authorities who still had no policy in place to stop the public turning up on trains and in cars. To decrease travel into Skegness, Lincolnshire’s police and crime commissioner Marc Jones called for caravan sites to also shut, stating that there were still “hundreds of thousands of visitors” entering the county over the last week.

The industry were already one step ahead: on Friday Butlin’s announced it was closing its Skegness resort as well as its sites in Bognor Regis and Minehead.

“We expect business owners will want to support the measures designed to keep us all safe,” said a spokesperson for Lincolnshire Police. “If officers see specified businesses open, they will remind them of the government advice.”

And even social distancing while at the beach doesn’t always do enough to adequately minimise the risk. A member of the management team in West Wittering in West Sussex described how “the crowds were into the thousands – dispersed on to the large beach”, but that the real issue is the method of getting there.

“We’re at the end of a peninsula, there’s one way in and one way out,” they said. That, however, was before Tuesday’s government lockdown. For the next month, the UK will only have one way in, and no way out.