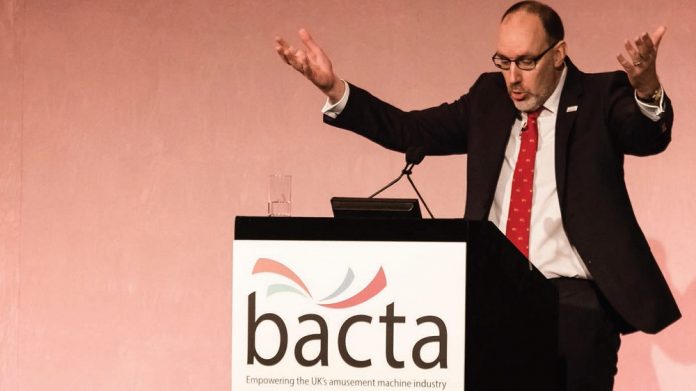 John White has said he and the rest of the Bacta staff are burning the candle at both ends in trying to secure unprecedented relief measures for a time of unprecedented health crisis.

Amusements and coin-op trade association Bacta has said it is doing everything in its power to ensure that government ups the level of pledged support initially unveiled by chancellor Rishi Sunak in last week’s budget.

As pubs, clubs and shops throughout the country closed their doors for an indeterminate period, the organisation went into over-drive in its consultations with operators and other trade associations – and sent daily updates on its activities by way of e-circulations to members.

“Coupled with previous advice and the indication that this crisis is likely to last many months, there is no doubt the economy generally and our industry in particular is facing a crisis like no other,” wrote Bacta chief executive John White in a guidance statement this weekend.

White said he had been in “close liaison” with a huge variety of leisure industry stakeholders as to the business- impact of all newly announced containment measures, including “government, MPs, Lords, the Tourism Alliance, Scottish Tourism Alliance, CBI and others.”

In terms of objectives, he claimed the organisation’s main focus would be collaboration with other business sectors in order to “press the government to go much much further than they did in last week’s budget.”

Indeed, the Bacta head argued that, such was the inadequacies of Rishi Sunak’s emergency relief package, that cashflow in British business could run into a veritable “brick-wall,” within a timeframe of “only a matter of days.”

“If we are not seeing the revenue from our customers we have to see the abolition of certain state costs and the deferment of others,” he remarked. “We are therefore calling for the abolition of the rates for 12 months, a cut in VAT, deferment of all state tax payments such as VAT, MGD and PAYE/NIC. In addition, all financial institutions should be under an obligation to defer repayments of any kind on loans, mortgages, charges etc, underwritten by government.”

Of course, White acknowledged that this laundry-list constituted an “enormous” ask from government, but said these kind of unparalleled efforts would “ensure we have a functioning economy” for after the virus itself subsides.

“It is a cost not dissimilar to that of the 2008 financial crisis or that of a war,” he commented. “This help has to be provided.”