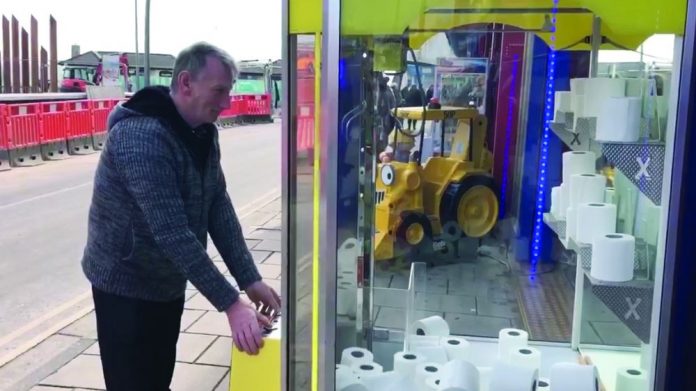 One FEC operator in the northeast of England made headlines at the expense of the Coronavirus this weekend, after stocking one of his crane machines chock-a-block with toilet paper.

Eddy Chapman of Chapman’s Funland in Bridlington was left bemused by the degree of apparent alarm over the new strain of flu, after hearing reports that local supermarkets were out-of-stock of necessities like loo-roll due to a rush of panic buyers.

Firm in the conviction that armageddon was not quite yet at hand, Friday saw Eddy lodge his tongue firmly in his cheek as he replaced the plush prizes inside his 30p per-play Maxx Grab machine with a veritable horde of bog roll.

“I think all this panic buying of toilet roll has been loo-dicrous,” a pun-happy Chapman apparently told HullLive. “I came up with this idea to hopefully get people to calm down…it’s not quilted or anything, just bog standard.”

Such has been the run on certain products such as hand sanitiser, dry pasta and toilet paper that the prime minister issued a call for calm last week, saying that he was “confident” of the UK’s “fantastic supply chains,” adding that there was “no need” for panic buying. Nevertheless, some major supermarkets have seen fit to institute a maximum item cap on certain specific products, as health experts warn that the spread of the Covid-19 virus has now “past the point of containment.”

But back in Bridlington, Chapman isn’t too worried, and hopes that his toilet-roll stunt might get people to see the funny side of things. “It’s just a bit of fun which is what coming to seaside towns like Bridlington is all about,” he said. “I think people need to relax a bit and stop panic buying.”