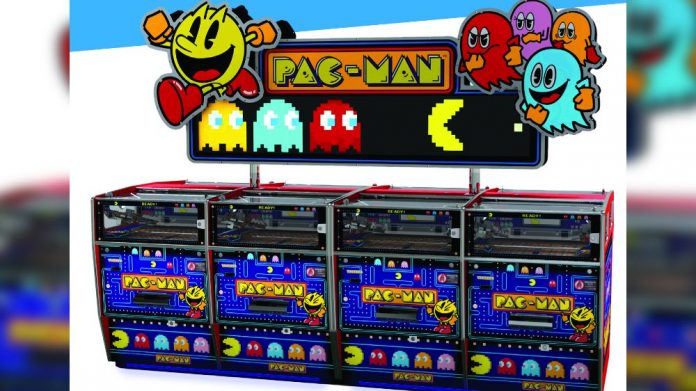 Pairing multi-generational licences with market-leading build quality, Bulldog Games has created its feature-rich Pac-Man pusher with longevity in mind, while capitalising on the current trend towards redemption.

Bulldog Games has seen a strong performance from its Pac-Man pusher ahead of the machine’s first run at a full season; which explains why the new launch is fully stocked and ready to deliver for the Easter push.

Showcased at January’s EAG, Pac-Man proved to be one of the stand-out products of the event, with attendees from FECs, holiday parks and even bowling alleys showing a keen interest. It’s warm reception into the industry is credited to Bulldog’s continued ability to create pushers that tick every box, with Tony Glanville, sales director, Inspired Gaming Sales, detailing the checklist of reasons why Pac-Man is so popular with players.

“With Pac-man we have brought together a number of elements that combine to offer a very complete product for players of all ages,” he said. “It starts with the licensing and how that’s displayed on the product, and with Pac-Man we’ve got one of the most recognisable licenses in the history of arcades. The branding is displayed bright and bold and that gives the product a very strong walk-up value for players.”

After walking up to the pusher, the next thing the player sees is the prizes on the beds, which Glanville explained is up to the operators.

“The operators are the world experts at it,” he said. “They understand the cost of sale and how they will set up the machine in terms of percentage.

Some may go with small prizes which are won more often, whereas others will do the opposite depending on the types of players they have.”

Some players are in it for the prizes, whereas others are more interested in just enjoying the game. This is where Pac-man’s features come in, which include the protagonist eating fruit to unlock extra rewards for players, giving the gameplay another layer of depth that has historically been missing in pushers. With the ticket option turned on, players can also win extra tickets through these features, giving Pac-Man a strong appeal to redemption fans.

“It really ticks every box for players, and for operators that means a consistent performer,” continued Glanville, adding that the high build quality is also something operators benefit from.

“One of the stand out attributes of the Bulldog range is the quality of the build,” he said. “It’s not something every player might notice, but we’ve been getting unbelievable feedback from operators who have been impressed with the reliability, robustness and overall quality of Bulldog products.”

Equally well-built is Bulldog’s Monopoly Gold, the manufacturer s newest and eagerly anticipated launch on one of the strongest licences in the marketplace.

Available in 4 player with a tickets out option, its features include a trail and a wheel spin displayed across the top of the iconically themed pusher. Glanville is confident Monopoly Gold will produce strong test figures backing up Bulldog’s pedigree to shine through once again.

“The investment and attention to detail given to Bulldog Games’ products is second to none,” he concluded. “That’s what makes them a must-see for operators at EAG and a one of the most popular pushers for players in the FEC.”