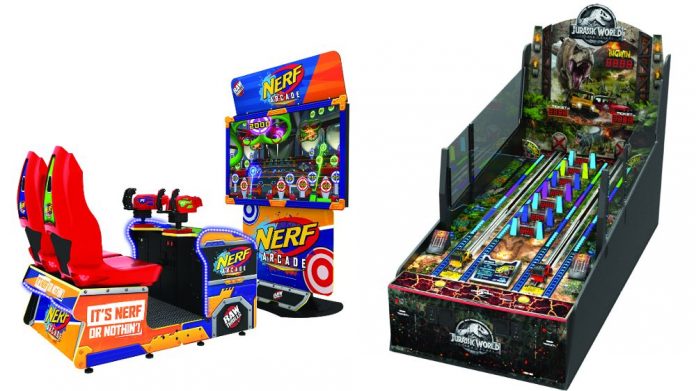 BNAE is kicking off the year with a medley of new must-have games and experiences from their esteemed partners.

All of the company’s products have achieved such lofty status through extensive testing and modifications through feedback to push them to the top of the list of the hottest proven products for 2020.

Needless to say, NERF has dominated after a successful launch last summer and has also just been deemed the 5th largest toy IP in the world by NPD. Each of the four levels available are rife with targets to fire at so there will always be an ambitious score to aspire to reach, all compiled on to an online leader board system. As we know, the industry is pressed to keep on top of market trends – one of the key components being to increase competitive play with online capabilities. Here, the proof is in the profit.

Next on the roster, Adrenaline Amusements has held ascendancy with its latest release RabbiDs and Ladders. This popular IP starring the extremely zany characters boosts an old classic board game into the 21st century to the gratification of children and adults alike for up to four players at a time. Referring back to the importance of being open to feedback and making alterations to initial releases, this one underwent a few tweaks following its first showcase at IAPPA 2019 to refine the earning potentials and increase the player enjoyment.

The tagline “Redemption has a new Alpha game” is enough to stir up excitement for Jurassic World Island Escape by Andamiro, and it does live up to its confident posing. To play, push the truck up the track with the appropriate force to reach the marker which changes position for each game. The number of tickets won is dependent on how close your truck stops to the marker. It’s genuinely one of those games that upon seeing others attempt it, you just need to give it a go too. It’s unique objective, stunning graphics, lights and sounds evidently engage players – a prominent asset in the arcade.

And lastly, for those that remember the 90’s game show Crystal Maze, TKM’s Ball Madness may echo a certain Crystal Dome-esque nostalgia. Work yourself into a frenzy by cramming a stream of falling balls into a catchment area as quickly as you can – the more balls caught, the higher the score and consequently the more tickets awarded.

The objective of the game doesn’t leave players short on laughs and the newly revamped cabinet has attracted many positive reactions from recent Expos. Due to the size of this unit and the fact players of all ages and demographics can compete against each other, the income has been outstanding to date and consequently there is limited stock available before Easter.