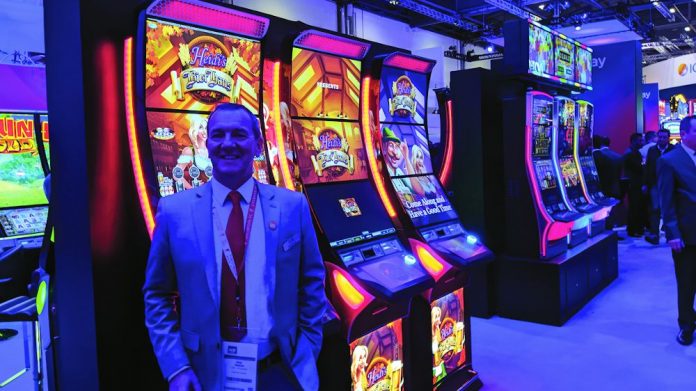 With a huge stand at ICE London 2020 still not doing the company justice, SG Gaming UK CEO Phil Horne explained that, by using the global synergies of Scientific Games, the manufacturer can develop new products specifically for AGCs and LBOs and AGCs while collaborating to pioneer the next generation of industrywide social responsibility solutions.

Showcasing new content, an improved player platform, and the next generation of social responsibility solutions, Scientific Games came to London to demonstrate the power of its internal collaboration and global synergies firing on all cylinders.

The new content came in the form of a number of new games for all sectors, including Heidi’s Bier Haus featuring the next iteration of Premium Play, a concept developed for UK retail gaming in response to the greater prominence of B3’s in betting shops. Heidi’s Bier Haus evolves Premium Play by offering additional features at every staking level.

Also on the stand was Beetlejuice, based on the 1980’s classic film, which showcased the new Mighty- Ways mechanic, and for the UK casino sector a specifically developed casino game; 5 Treasures.

For operators using SG Gaming UK’s online customer portal, CUBE, all the company’s content is available to view, with the manufacturer showing its latest development of CUBE at the show, which is now more personalised to the operator.

As well as a games suite, CUBE offers a marketing suite, promotions and analytics to assist operators in machine management and decision making.

Indeed, personalisation has been a key focus for the company of late, as it continues to evolve its player-facing terminal menus, including an improved search facility and presentation of game advertising to better demonstrate to players how the games will play, as well as a new favourites functionality.

“All this development is off the back of feedback from the market and from our players whose opinions we really value,” explained Horne. “From that feedback, and from collaboration with the wider Scientific Games group, we have a constant stream of content with a global reach, a significant R&D budget on emerging technology, and the knowledge of having an involvement in every component part of gambling you can imagine.

As a global company we can link all that together to create industry-leading products and solutions.”

One of the most impressive developments brought to London by Scientific Games was its player platform, a double-sided coin offering both improved player features and safer gambling solutions.

On the latter, Scientific Games has been developing a new computer vision technology; SG Vision, which Horne demonstrated to regulators on the first day of ICE 2020. “I was showing the UK Gambling Commission what we’re aiming to achieve, and in a nutshell we’ve put a camera inside a gaming machine,” he continued.

“Data is gathered from the player’s face, creating an anonymous ID and a corresponding number – for example, number 56. Then our ambition is to do three things with that technology; identify that player 56 is over the age of 18 and so able to gamble, determine that number 56 is not on a self-excluded database – and we demonstrated on the stand the ability to block the terminal, so if number 56 is signed into a self-exclusion scheme, it will recognise them and block the terminal.

And finally, with the ability to identify players, we are able to link spending sessions. We can link what number 56 spent today with what they spent yesterday, and if their play patterns get chaotic – we see they have spent £200 when they normally spend £20 – then that data in real time goes back to the machine operator whose staff can engage their social responsibility processes with the player.”

Horne added that the regulator seemed “genuinely pleased” with the efforts Scientific Games has put into its social responsibility solutions, which have been developed by a collaboration of the entire Scientific Games group through a partnership with Amazon Web Services.

“We’re keen to spearhead industry-wide solutions rather than just for betting shops and casinos, and I think the Commission are impressed with what we’re doing in that area,” he said. Horne also explained how Scientific Games is currently working with a leading UK operator, with the aim of rolling out the technology at the end of the year.

For bingo and AGCs, Scientific Games has been sharing its limit setting and player tracking solutions, with operators in all gambling verticals putting a large focus on social responsibility as the new decade begins.

Of course, the last decade ended with the removal of B2 games, however according to Horne LBOs have seen “no great uplift” in their online games, such as online roulette, but over the counter sports betting has benefitted from a small increase in trade, along with some AGC operators.

As for machines in LBOs, Scientific Games is seeing its B3 games gradually improve in performance as the market adapts to the new stake level.

“The stake cut was introduced in April, and by the end of April the gaming machine performances in LBO were down 44 percent,” concluded Horne. “That figure is now significantly lower, so I think consumers have begun to get used to the changes, and some of that trade is coming back through B3, but not all of it.”