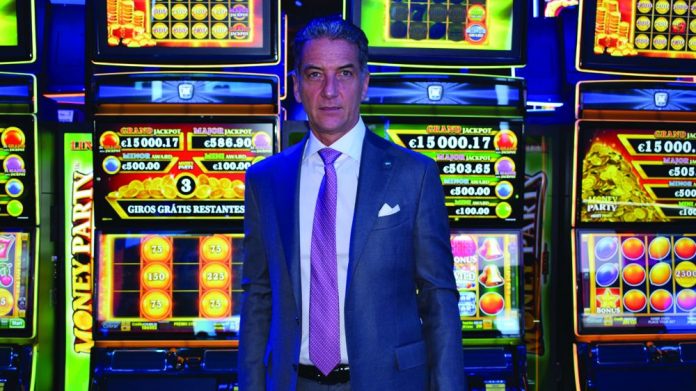 With the company all set to celebrate its 40th anniversary and having recently concluded several years of consolidation, Novomatic’s CEO and chairman Harald Neumann is bullish on the UK market as he discusses the firm’s plans to open between 40 to 60 new arcades in the country this year.

Coinslot: Mr Neumann could you give us a brief overview of how business is going at the moment?

Harald Neumann: I would say that business is doing quite well worldwide. In the last few months, we’ve seen growth across all the markets we operate in. We’re very optimistic for 2020 overall and we’re expecting to see a 10 percent increase in revenue and EBITDA.

In the UK, the upcoming review of gambling legislation looks like it will be quite positive for us. The FOBT stake change has already provided a significant boost to our arcade business.

We’re planning to further invest in the UK arcade sector and we expect to open between 40 to 60 arcades in 2020. My outlook is positive for the year ahead.

In summary, the UK, Germany, Central and Eastern Europe, and Spain represent our key growth markets, where we will concentrate our investment in the coming years.

CS: Novomatic UK sold its Gaming Technology Group to Inspired Entertainment last year. What was the reasoning behind that divestiture?

HN: The companies within the Gaming Technology Group, such as Bell-Fruit Group and Astra Games, were mainly producing machines for UK pub sector.

As I mentioned, we’re very strong in the UK AGC sector, but this was an area that really fell outside our core business.

When Inspired Entertainment approached us and asked if we’d be interested in selling the Gaming Technology Group, it was an interesting offer for us and one we ultimately decided to move ahead with.

During a recent meeting with Inspired’s CEO and chairman Lorne Weil, he told me they’re very pleased with how things are going and anticipate quite good numbers and naturally we’re glad to hear that. The best outcome for a deal is when everybody’s happy.

CS: The sale of Novomatic UK’s Gaming Technology Group formed part of Novomatic wider consolidation and optimisation of its corporate structures. Could you tell us more about this process?

HN: The phase of consolidation Novomatic has undertaken over the last couple of years, which also saw us sell off Novomatic Lottery Solutions, is now more or less complete and we are expecting quite significant growth in the coming years. Taken as a whole, it really offered us the opportunity to refocus on our core business.

CS: What’s your opinion on the current state of regulation in Europe?

HN: There are both positive and negative aspects to the current situation. The positive is that most of the outstanding regulatory issues have already been addressed, as is the case in Germany.

With regards to the UK, we know there is likely to be a new regulatory framework in the pipeline, however we anticipate this will mostly affect the online sector.

Looking ahead, I would expect to see further emphasis on having some kind of certification framework in place for player protection processes.

In this area, Novomatic is striving to stay ahead of the curve and we recently received G4 accreditation for 11 of our subsidiaries, including online. Naturally, that’s something we’re very pleased about.

CS: If you were to identify one area where you’d like to see change in the industry, what would it be?

HN: I think the most important area I’d like to see change is player protection. This remains a major issue for the sector as a whole.

It’s very important for industry stakeholders to maintain an ongoing dialogue with both regulators and politicians to ensure they are accurately informed regarding player behaviour and the effects of any proposed changes on the market.

There are two points that are key for everybody to understand. Firstly, that land-based and online gaming exist as part of a whole, it’s impossible to just focus on one sector and ignore the other.

They also need to be conscious that tax increases or changes to the payout ratio, don’t just affect the operator but also the players. If any market becomes too strictly regulated, it will drive players to illegal operators and that’s the worst thing that could happen.

It’s the responsibility of the industry as a whole to make a positive contribution towards shaping regulation which will ensure that the business remains economically viable, but most importantly, that players are sufficiently protected.