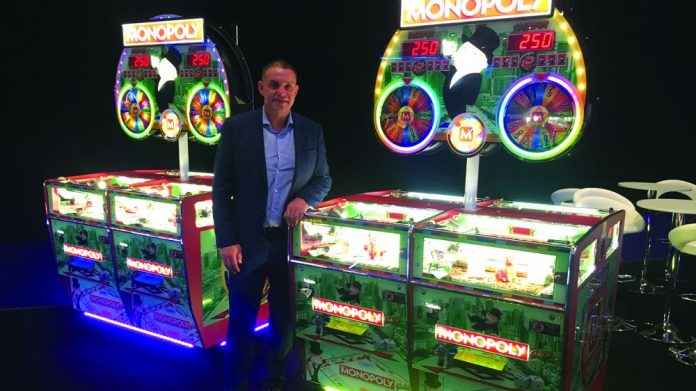 It’s the first showing of Inspired Entertainment’s UK operation and, as expected, they certainly made an impression at EAG last week. Sales and marketing director Ian Shreeve revealed the latest releases to drive the group’s offering.

It’s been 12 months of huge significance for Inspired’s recently acquired UK division which took to the ExCel floor this year to demonstrate the continuity of its full-service customer offering.

And it didn’t disappoint.

Showcasing the vast range of entertainment on offer from Astra, Bell-Fruit, Bulldog and Inspired, senior vice president sales Ian Shreeve noted how the brand’s sizeable stand contained almost everything the industry could want.

“We’ve brought the full range,” said Shreeve. “As with the last two years we’ve had some great feedback from customers, who are very happy with the service, the support and performance, and we’ve picked up some nice orders, so we’re very pleased indeed.”

“The point of difference has been how we support the products in the field, the installations, the package, the spares at point of delivery,” he told Coinslot as he cast an eye towards the Bulldog offering on the Inspired stand. And there too, things had certainly changed: “Two years ago we had the ones and the two orders, then we’ve had repeats, and then as the new models come in, most of the FEC arcades around the coast now have Bulldog pushers.”

As expected, new addition to the range Monopoly Gold attracted plenty of attention at the show ahead of its Easter testing debut, alongside the Pac-Man range and Monopoly, which Shreeve observed “have done extremely well for us.”

However, the pushers are only part of the Inspired story. The attention grabbing Prismatic cabinet, which has enjoyed significant success during its year in the market, continues to appeal.

“2019 for Astra and Bell-Fruit was all about Prismatic, and Prismatic was showcased at this show with 56 machines lined up. It was a massive launch, beginning with 100 in the market. When we got to the end of 2019, we had 2,700, so that is a phenomenal year.”

“We have a product that’s in the market at number one, a development team behind it, and we’ve pushed the competition to make some changes in their product, so I think we have had a tremendous 2019.”

In terms of driving innovation within the market, Astra and Bell-Fruit’s releases have always had a notable impact; indeed, it was one of the key reasons that drew Inspired into the UK arena last year.

“We utilise all the tools in the kitbag,” observed Shreeve. “We’ve spent years understanding the market from retailer to operator, and by delivering a terminal that’s reliable and well-priced, I believe we’ve helped move it a step up in terms of retail offerings.”

And this was a message coming through at EAG very strongly. “Many retailers are telling us that Prismatic is their premium product,” said Shreeve. “Not just in cashbox – which is really important, but also in changing a retailer’s perspective of operating. Prismatic has brought with it a vast range of digital possibilities and has opened up new opportunities for retailers to develop their gaming floor. I am confident the pub retail market will hit the 70 percent digital mark in 2020. This would not be possible without Prismatic delivering cash box uplifts exceeding all expectations in what was previously thought to be reel based analogue, low rental positions.”

But it’s not just the retailer that benefits. A look at the figures show just how great an impact Prismatic has had on the player. Shreeve explained: “Players have responded strongly to Prismatic because we understand what they’re looking for from setting out a menu, content mix, consistency of RTP, which have all helped to capitalise on the changes in the market over the last 12 months.”

“Overall, we pull more levers, and faster, than the our competition.”