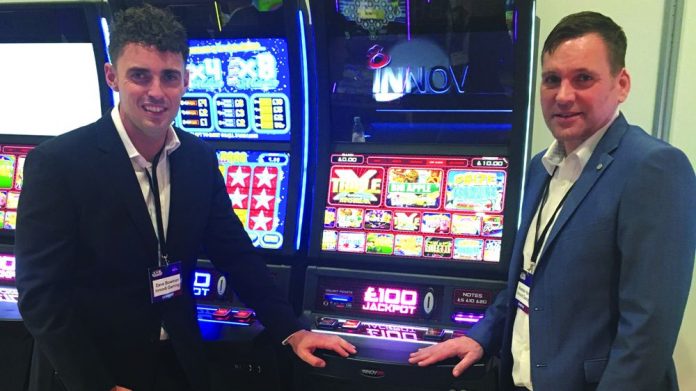 If variety is the spice of life, Innov8 Gaming certainly added some heat to EAG this year, offering multiple variants of its cabinet selection, alongside a new AGC menu to complement the success of its pub offering.

With a reputation for high quality digital pub content already established during its two years of operation, Innov8 Gaming brought its best to EAG this year, with the Total Eclipse cabinet, Partial Eclipse cabinet and Apex cabinet all attracting attention. Presenting a wide range of styles and variants in its cabinet offering, sales manager David Bowman also guided Coinslot through its newly expanded game propositions, as its new AGC menu debuted at the show.

“It’s something we always wanted to do but obviously we’ve only got so much development time,” said Bowman. “We wanted to finish off the first version of the pub menu, then once we’d done that, it was onto the AGC menus.”

“It’s a massive market and one we have long identified as a key target,” he noted. “The people who’ve come to the stand and had a look have been very impressed with what we’re showing. So we’re happy.”

“This year, the product leader for us is going to be the Apex cabinet, whether it be the pub that gets the real traction or the AGC, obviously we hope both.”

With the Total Eclipse cabinet presented in two variants at EAG, and the Partial Eclipse offered in four different, individually themed variants, Innov8 made sure to offer those visiting its stand a wealth of choice, something Bowman sees as key to further development.

“Everyone’s got a different opinion, so we’ve got a mixture, and it’s going to grow over the next 18 months with different cabinets, and different menus.”

Highlighting the substantial success Innov8 is already witnessing, Bowman added: “We’ve only been physically selling into the market a few months, and we’ve already achieved a great deal in that short time. And we are going to expand on it.”