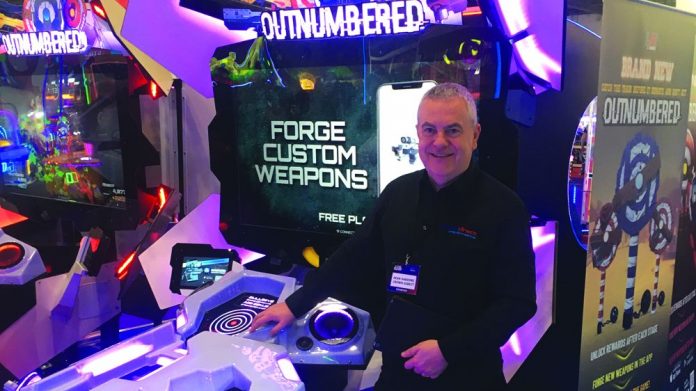 Crown Leisure set the tone for the coming year at EAG with a stand full of technologically-driven games and innovative operational solutions, as Dean Harding outlined.

Crown Leisure is putting faith in innovation as it heads into the new, said a confident Dean Harding, at the EAG expo last week.

And Crown Leisure’s managing director affirmed this commitment by debuting a number of technologically- driven products at the ExCeL – much to the acclaim of visitors.

“The first day was a good one for us; steady solid business. From an interest point of view everybody had been talking about the Ultra Moto VR from UNIS. It combines an immersive motorbike video racing experience with a virtual reality headset, which really sets it apart,” commented Harding.

“We have had it out in one of our locations for the best part of two months and the takings have been very strong. This is the first time it has been exhibited here in the UK and people have been really impressed with it.”

The Crown stand featured a number of other notable debuts including Over the Edge from Bay Tek, the Haunted House four and eight player pushers and the Outnumbered shooter from LAI Games.

“Outnumbered is a really interactive take on a shooter. Players download an app to their phone which then acts as a game portal where they can track scores, customise their own weapons and have that reflect when they play the game on-site through the scanning of a QR code.”

Innovative products such as Outnumbered and Ultra Moto VR are leading a much-needed revitalisation of the video market, added Harding.

“The market was at risk of becoming a bit stale,” he said. “But now products like these are helping to engage younger players that have grown up with smartphones and games consoles. They’re bridging that gap between at home and out-of-home entertainment and the response has been brilliant.”

“We have got one out on site in Blackpool currently and the uptake has been fantastic,” commented Harding. “In terms of both the customer experience and the operator back-end it is a really slick unit, there’s been a lot of interest in that.”

EAG 2020 was typified by increased confidence for the coming year, a notable change from feelings of uncertainty that permeated much discussion in the last twelve months.

Whilst this is undoubtedly a step in the right direction there are still issues for the industry to navigate in the coming year, especially when it comes to legislation, added Harding.

“Since the last gambling act technology has changed the face of not only gaming, but public life, so a review of it is long overdue. Establishing parity between online and land based offering is a key concern that I would like to see this Parliament address, but if and when they get round to it is anyone’s guess.”