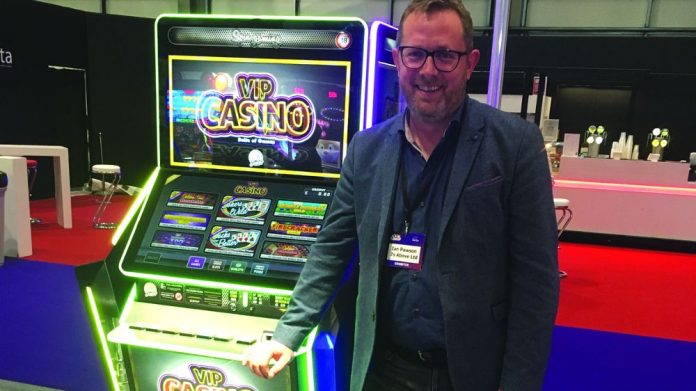 Presenting a range of both brand new launches and surefire hits, 7s Above took to EAG this year to demonstrate the personal service, care and consideration it brings to ensuring its customers are offering the best in the market.

As well as premiering Spin Gaming’s new Goliath cabinet alongside the popular Titan, 7s Above director Ian Pawson told Coinslot how the company’s new game update can simply and efficiently bring all the latest titles direct to operators.

“Titan’s been out for about 12 months now, and the Goliath debuts this week,” said Pawson. “The response has been very good. It’s the wider screen presentation, everything about it is great. But they’ve also done all those games in kit form now, so that people can update Genie cabinets, Vision cabinets, and it’s a really easy 15 minute kit to fit.”

“They do it onsite, so there’s hardly any downtime with the machine at all, it’s using the existing PC that’s in the machine. It’s just a security dongle and a game key.”

Spin Gaming’s Goliath cabinet was presented with the VIP Casino B3 game pack, while the Titan features the VIP Casino Cat C game pack, with both machines appearing alongside the top-performing Super Bullion Bar X three-player from Reflex Gaming.

“The Super Bullion Bar X has been the best selling three-player of the last 12 months by some distance, it’s very, very good.”

“There’s also the GamePro Cat C three-screen digital, which I believe is a hot product for the next 18 months. I think AGC operators are now looking to jump on that digital bandwagon, and start giving their players a different offering.”

While operators are increasingly looking at the prospect of integrating digital, Pawson noted that the GamePro delivers a “really lovely balance” for those entering the vertical for the first time, with its 23 games being added to monthly with new titles.

Pawson also observed that the embrace of new technology reflects a wider trend among the industry to deliver increasingly higher quality experiences, something which 7s Above views as a positive progression for the whole sector, and which the firm can help fulfill with its “honesty, work ethic, and willingness to do a deal.”

On the stand, too, was Spin Gaming’s Alan Parker who was enthused by the reaction to his company’s portfolio. “We had a very good response to our VIP Casino at EAG, both B3/4 and Cat C versions,” he told Coinslot.

“Operators particularly like the new Roulette and Poker games we had on offer (again both B3/4 and Cat C versions) and we received a number of compliments relating to the innovation of our games,” he added.

And the market should expect more as Parker confirmed: “We are continually developing new innovative games to add to the compendiums and offer a wider choice of games to the player. Some of these will be released in the coming months.”