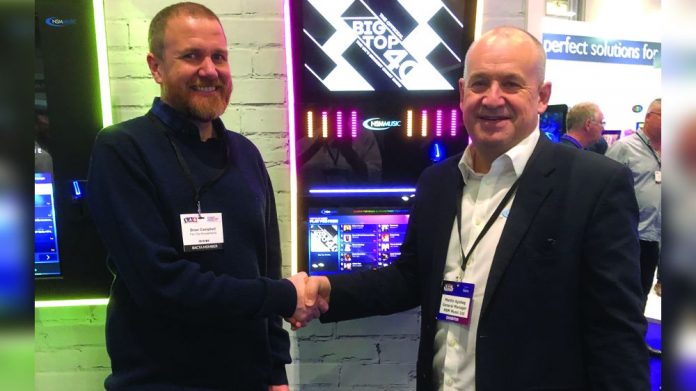 At the recent EAG, Perth-based Fair City Amusements placed an order described as ‘substantial’ by director Brian Campbell. The investment is thought to be five figures and will see, over the next two months, multiple Curves installed in sites from Aberdeen to Edinburgh and Perth to Glasgow. Curves, that is, from jukebox manufacturer NSM Music.

Campbell noted: “In the fierce competition for attention in modern pubs, products need to stand out and I think The Curve confidently does that. From a more practical point of view, there were a number of features that drew us strongly to The Curve. The new TS2 interface was one of the main reasons – it’s incredibly intuitive. In fact, I think it’s so easy even my Dad could use it. We’re pleased to be the first Scottish company to bring this really exciting product to market.”

NSM’s TS2 user interface mirrors smart phone usage to offer the most intuitive experience possible, getting end-users to their selection quicker than ever. A fully online product, The Curve comes with features aplenty, not least of all a constantly updated Vodaphone Official Big Top 40 charts – from the UK’s biggest commercial radio programme.

Fair City Amusements are the second company to bet on The Curve. In mid-December, Kent-based Ivor Thomas Amusements ordered 100 of the next generation product.

A fact that prompted NSM’s Martin Agebag to add: “It’s superb to see the reception The Curve is getting from experienced, knowledgeable operators at either ends of Britain. Fair City have always been early adopters when it comes to new products and technology, so their vote of confidence means a lot.”

The Curve also benefits from NSM’s new ‘Co-Pilot’ software which can put an entire jukebox estate in the hands of customers. Background music, advert creation, settings adjustment and financial data are all accessible from the swipe of a finger. In terms of hardware, The Curve uses the same, fully guaranteed, core processor, pascal amplifier and 500g solid state hard drive as their successful Thunder and Lightning jukeboxes.