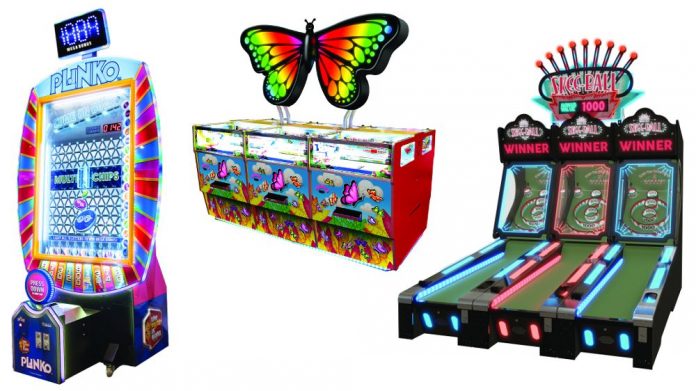 Harry Levy is showcasing the innovative takes on three amusements staples this year with the Skee-Ball Glow from Baytek, Plinko from Coastal Amusements and its own Butterfly Pusher.

From when it was first patented, back in 1908, through to the present day Skee-Ball has been an integral part of the global amusements landscape.

At EAG Harry Levy will be showcasing the latest iteration of this classic game with the Skee-Ball Glow three-player redemption unit from Baytek. The product features all the trappings one would expect of a top-end Skee-Ball product, but with an elaborate light package that adds a modern edge to the arcade staple.

Standing over three metres tall when installed with its colourful marquee, Skee-Ball Glow is perfect for low-lit FECs and game rooms.

Plinko – from Coastal Amusements – is set to be another key addition to the Harry Levy portfolio. Featuring a massive main screen and simple-as-can-be gameplay, the unit is unmissable on the arcade floor.

Standing over three metres tall and a metre and a half wide it brings the physical excitement of Plinko up to the present day with LED scoreboards and ticket payout.

Players are tasked with dropping chips into nine different score zones, with more tickets awarded for higher-value scores. An additional mage bonus can also be activated by lighting up all nine slots in one playthrough, adding an extra layer of skill to the experience.

Having made its UK debut in the back end of 2019, the six-player Butterfly pusher from Harry Levy will be a key part of its EAG presence.

Previous entries in the Harry Levy family of pushers, including the renowned Caterpillar, have become mainstays of the UK amusements market, offering operators quality designs and strong cash box performances.

The Butterfly six-player is to continue this trend with its bold livery, large, colourful topper, and classic Harry Levy quality. Offering low-cost, high-engagement entertainment and appealing to the broadest possible demographics pushers are a veritable institution of the British leisure landscape and remain the cornerstone of many venues. The butterfly six player pusher is designed to build on this classic success whilst bringing to market the latest in product design and game technology to ensure maximum returns.