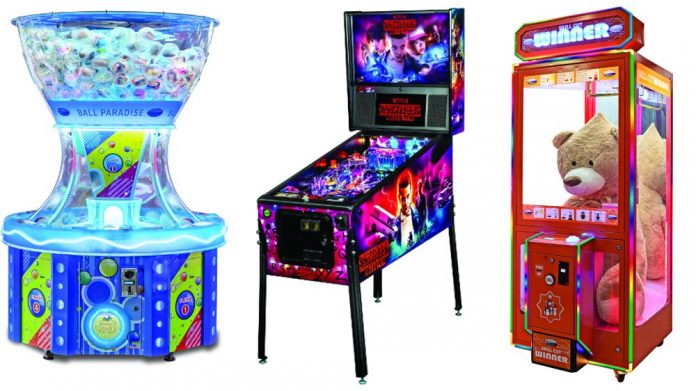 At EAG, Electrocoin will be showcasing a host of exciting new products and developments for already-successful lines for the single site, AGC and FEC sectors.

Redemption and prize pay-out machines will be represented heavily by Electrocoin this year’s show with a number of exciting products.

Making its EAG debut is the eye catching Four Player Ball Paradise. It is another new game that has tested superbly, whereby by pushing a button, players must correctly shoot a ball/capsule into a hole to win the prize.

“Four Player Ball Paradise, with its eye-catching cabinet, which can hold approximately 500 large capsules, will stand out in any FEC location and one of its major attractions is its fun for all the family as they can play together at the same time. It has been testing very well and EAG will be its full launch as we go into full production” said Electrocoin’s John A Stergides.

The hugely successful Skill Cut Winner will be on display in five different colours along with the popular Drop A Winner and its Deluxe version.

“These machines have been top earners this year and to offer more choice for operators who choose to have two-four Skill Cut Winners per location, this is now available in eight colours,” added Stergides.

Electrocoin will also display Hit and Smash. “Hit and Smash is a classic carnival game whereby players must throw the balls and hit and smash’ bottles knocking them down, to earn and accumulate points to win bigger prizes.”

Konami’s latest dance video game DDRA will be on show along with Digital Centre’s Panther Revolution Photobooth and the GoGo Chicken.

Stern Pinball will, as usual, have a significant presence at EAG, with the European debut of Stranger Things – based on the popular Netflix TV Series.

Pro and Premium editions will be on display alongside the blockbuster licenses – The Beatles, Jurassic Park and The Black Knight.

Stergides added: “Stranger Things pinball will feature a first ever video projector that displays images and animations directly on the playfield. It will provide a further dramatic interaction with gameplay action. Stern titles appeal to different player interest whether it is film, tv, music or pinball enthusiasts.”

CAT C will also feature strongly for Electrocoin, with both arcade and single site sectors seeing products on offer. Monte Carlo and Casino HI Roller will be on display in the exciting Elektra Cabinet along with the alternative cabinet, Gemstar. There is now a twenty-game menu, which includes a variety of games targeted at both single site and arcades, with both Hi tec and lo tec games proving to be popular across both sectors.

In addition, Electrocoin will show the classic reel-based Bar-X 7even Refurbished model with its £25 Jackpot, the Bar X Cat D Infill and Spin 500 B3 with a new compendium of roulette games in an exciting new cabinet.

Electrocoin has established itself as the one stop shop for ticket management, with the Galileo Tickets Eaters and Elmac WINMT SQL system for single and multiple sites also on display at EAG.

The FEC Sector is increasingly looking at going cashless and with Electrocoin providing support in the UK in the shape of the Intercard’s system, which has proven itself to be very flexible and popular with customers and operators alike where installed.

“FECs can either go completely cashless with e-tickets or combine it with coin-play and redemption tickets, and both of these systems will be demonstrated at EAG.”

Electrocoin’s John A Stergides indicated his eagerness to get to the year off to a flying start. “Whilst Electrocoin attends a number of shows, EAG is the one that sets the marker for the coming season. With a number of new and exciting products, whether you operate FEC, AGC or single sites, there will be something for everyone so make sure to visit Electrocoin on stand 515.”