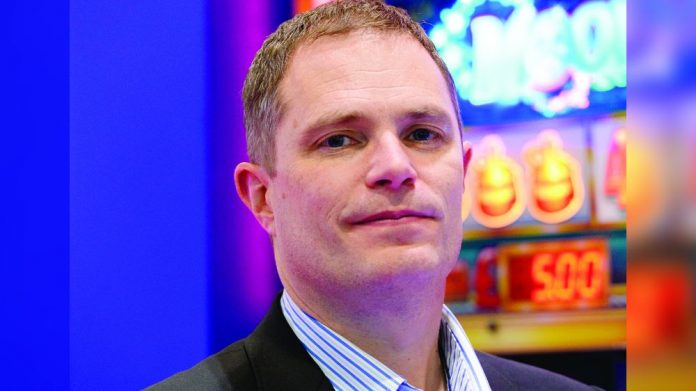 Dransfields will be making a statement of intent over the next month when they head down to London for the 2020 editions of EAG and ICE. Expect big and bold from the impressive group of companies now under the Dransfields banner. Among those delivering the ambitious message is Reflex’s Mat Ingram who gives Coinslot an insight to the direction of travel of a very aspirational group

Dransfields are one of those impressive British business stories: now entering its ninth decade, from humble roots as a one-armed bandit manufacturer in the 1940s, it now encompasses the supply, manufacturing and operational sides of gaming in the UK.

And its vision extends far further as visitors to EAG next week will find out. “The group has come together in such a natural way, it’s time to show the industry what Dransfields represents,” explained Mat Ingram, director of Reflex Gaming, whose pioneering game development operation only joined the Dransfields stable six months ago.

And what a six months that has been: Dransfields have completed that rare industry circle of creating, making, distributing and operating machines. Not bad for a company that has for some significant time operated outside of the spotlight, albeit no less successfully.

Is that about to change? Ingram prefers to steer Dransfields’ well-trodden modest line, although the message itself is somewhat more aspirational. “We want to showcase the businesses as one group, and that means a bigger floorspace at both EAG and ICE.”

By bigger, Ingram actually means doubling the size of their presence at the two London shows. And by showcasing the group, he means signalling a ‘statement of intent’.

“We’ve got an innovative plan for our stand at EAG next week. We’re very excited about it and it’s something to look out for,” he nodded expectantly.

The drum can roll when the curtains rise at EAG next Tuesday, and rest assured Reflex and the Dransfields group will have a stand worth raising a glass to. But that’s only part of the story.

“It’s time for another major national operator on the scene.”

What? You were just talking about an innovative stand design – a couple of chairs here, a backdrop there maybe. Where did that come from?

Well, apparently, it comes from confidence. And Ingram has that in bucket loads when it concerns the Dransfields offering.

“We’re ready to show the industry how powerful we’ve become together and how that can benefit our customers and business partners going forward,” he explained. “We’re positive and energised by the progress we’ve made since joining the group and both EAG and ICE are great platforms to really bring the group to the industry.”

So what is Ingram and co bringing to the industry? “One of the most advanced systems in the UK,” he started, “huge heritage and enormous pedigree in the marketplace, data unrivalled by any system currently, incredible content and an SR commitment that will alleviate the pressures on operators.”

Yeah. But what have the Romans ever done for us? It seems quite a lot under the developing Dransfields empire.

Without doubt this is a significant month for Reflex and the Dransfields group, and they have a story to tell. Ingram explains: “Both technologically and creatively, we have evolved beyond our expectations. Through Slingshot and Dransfields’ own platform OneOS, we have developed the most advanced system in the industry. The extent and richness of the data we can draw is immense; pub retailers have been blown away by what we can do.”

And that confidence in its portfolio of software, content and machines is matched by Dransfields commitment to the cause: “The key advantage that we have is the support and backing of Dransfields. Everyone respects the company as one of the most profitable operators in the marketplace. And that enables them to work with their capital and provide an investment budget to build and develop the next generation of servicing for the market. This is a moment of opportunity for the group and its customers; there is a new direction the industry has to take, with technology and creativity driving things forward. The Dransfields group are among the best placed to push these innovations forward.”

And there was us thinking a nice comfy chair and a pretty background on the Reflex/Dransfields stand at EAG. When Mat Ingram said ‘statement of intent’, he clearly had something way more ambitious in mind.