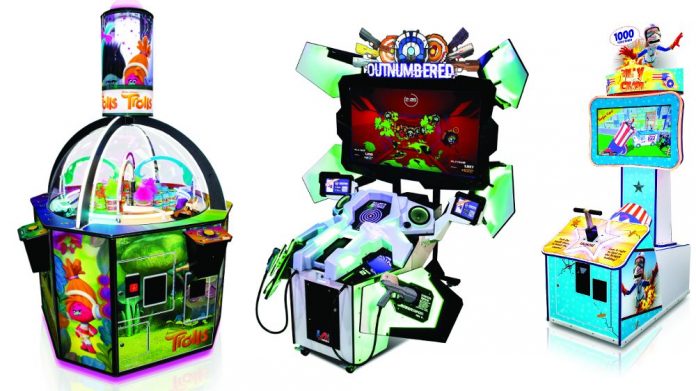 Harry Levy will be starting the new year from a position of strength, with an EAG stand showcasing the company’s broad amusement portfolio.

The Harry Levy stand at EAG will feature a number of innovative redemption titles from Baytek, including the Trolls Tower of Tickets four-player unit.

The popular Tower of Tickets Re-Load has been given a brand-new look with this DreamWorks Trolls version – sporting bold graphics, bright colours and instantly recognisable characters that will appeal to players of all ages. This classic four-player redemption game is based on skill, with players having to release an arm at the right time to knock pucks from the rotating field.

Also from Baytek will be Willy Crash Junior, which brings all the excitement of the original Willy Crash with a reduced footprint. One and a half feet narrower and 10 inches shallower than its predecessor, the unit features a 32” inch screen and an attractive top box meaning that it remains a stand out installation despite its smaller size.

Harry Levy will also be showcasing the Skeeball Glow three-player from Baytek, which features an elaborate light package that adds a modern edge to the arcade staple.

Standing over three metres tall when installed with its colourful marquee, Skeeball Glow is perfect for low-lit FECs and game rooms.

Plinko – From Coastal Amusements – is another strong entry in the Harry Levy stable. Featuring a massive main screen and simple-as-can-be gameplay, the unit offers a modern twist on the instantly-recognisable game.

Players are tasked with dropping chips into nine different score zones, with more tickets awarded for higher-value scores. An additional mage bonus can also be activated by lighting up all nine slots in one playthrough, adding an extra layer of skill to the experience.

Also on the Harry Levy stand will be Outnumbered, a competitive target shooting video game from LAI Games.

The video shooter is designed to generate repeat custom with players unlocking upgrades as they progress – all of which can be accessed by a companion app.

In the short time that it has been on the market Outnumbered has generated a strong competitive community, with players vying for top spot on the global leaderboard.

Couple this with the classic engagement of a side-by-side two player unit, and Outnumbered is sure to keep players returning to venues time and time again.