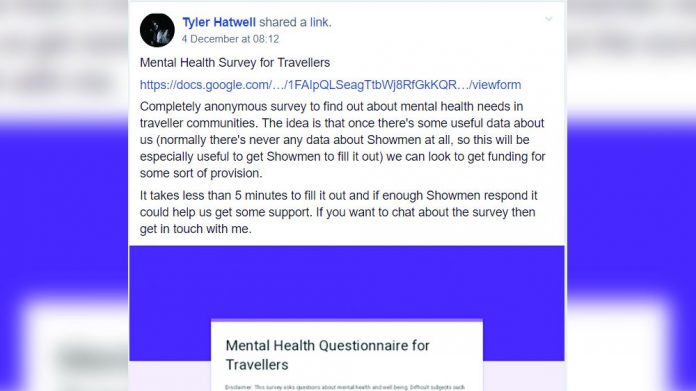 A survey questionnaire targeted at travellers has been uploaded to social media, in an attempt to better understand the mental health challenges faced by people within the Showmen community.

Save Feltham Showman advocate Tyler Hatwell posted a link to the form last week within the Showmans Pride Facebook Group, alongside a disclaimer that respondents to the survey would remain“completely anonymous.”

“The idea is that once there’s some useful data about us we can look to get funding for some sort of provision,” Hatwell explained. “Normally there’s never any data about Showmen at all, so this will be especially useful to get Showmen to fill it out.” By the latest NHS reckoning, roughly one in six people suffer from some kind of mental disorder at any one time – with the rates of severe mental illness seeing a steady climb from the early 1990’s on.

Health professionals acknowledge that a decent proportion of these inflated figures are down to social changes which have allowed people to more readily discuss their mental state – but it is also believed that the rigours of 21st century life may also be taking its toll: with a high cost of living, high expectations of individual success, alongside the negative influence of social media, all taking its collective toll.

The Traveller questionnaire itself doesn’t go into the specific reasons people attribute to the cause of any mental health problems, but rather poses users with various multiple- choice answers to broader statements such as “I feel like I have power over my life,” and “I feel like I have a strong sense of identity.”

The survey also asks more pointed questions like, “what do you think a good support service should be like?,” and “would you access a support service if it was run by trained travellers?”

“This questionnaire takes less than five minutes to fill out and if enough Showmen respond it could help us get some support,” said Hatwell. “If you want to chat about the survey then get in touch with me.”