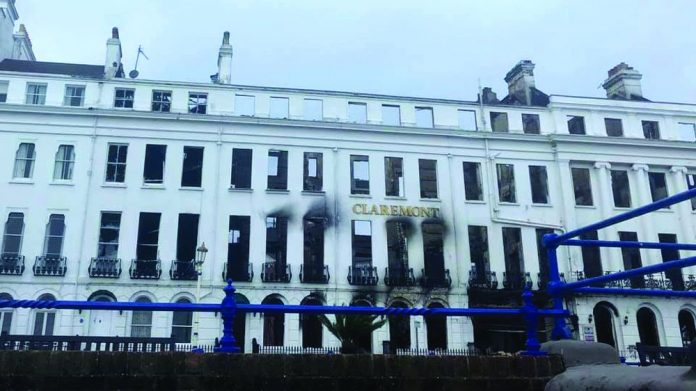 A fire at Abid Gulzar’s former seafront property the Claremont Hotel continues to prevent access to his new operation, Eastbourne Pier, as the ruins of the burned-out building teeter on the brink of collapse.

Pier and hotel owner Abid Gulzar has spoken of his emotional turmoil in the wake of a fire which gutted one of his former properties and continues to prevent public access to his flagship operation, Eastbourne Pier.

November 22 saw a fire almost completely destroy the Grade-II listed Claremont Hotel, a seafront Victorian establishment of which Gulzar was proprietor up until 2013.

The blaze broke out early in the morning as guests were having breakfast, but despite a quick evacuation and prompt response from more than 60 firefighters, it proved difficult to control. By day’s end, new owners Daish’s Holidays reported “devastating” damage wrought to the integrity of the structure, which dated back to the 1850s.

Nearly two weeks on, and the affected stretch of seafront – which sits directly adjacent to the entrance of Eastbourne Pier – remains closed off to the public due to safety concerns: as authorities report the collapse of the building’s rear wall and a chimney which “appears to be moving.”

Speaking to the Eastbourne Herald, Gulzar disclosed how he had wept whilst he “stood and watched” his old business burn to the ground. “I owned the hotel for several years and it has remained very close to my heart,” he said. “I invested hundreds of thousands into the Claremont… I absolutely loved the wonderful building.”

However, as he praised the work of emergency services for “an absolutely amazing job”, the business magnate also voiced his concerns regarding a lack of clear communication from authorities as to the specifics of when the area might be reopened to public access.

“Lives must come first and I fully understand that there are still concerns about the building,” he remarked. “But nobody has spoken to me from the authorities as to how long the area will remain sealed off.”

And Gulzar was keen to stress that “every day Eastbourne Pier is closed is another day where the business remains challenged,” adding that the net impact was having a “huge effect” to his operations.

“I really would appreciate some communication,” he said, “as I am sure others living nearby would, as to the plan for the coming days and weeks.”