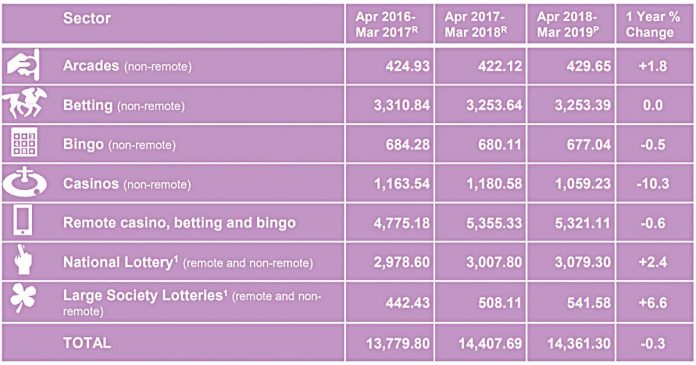 The Gambling Commission’s most up-to-date reckoning of the gambling industry recorded FOBT players redirecting in numbers to B3 product in the run up to March 31. Some comfort for the industry, some licking of the regulatory lips for the commission.

The latest industry statistics released by the Gambling Commission have made crystal clear the extent that both the landed AGC and bingo sectors have recovered some of their base from the government clampdown on FOBTs.

The new, back-dated numbers cover the 12 month period that ended directly before the institution of the £2 stake limit (which came into effect as part of the 2019 Finance Bill on April 1). However, despite B2s still permitted to offer punters inflated wagers throughout the four quarters under analysis, that didn’t stop a dramatic transfer of player traffic from B2 to B3 product. The figures speak for themselves: with betting terminal yield down by almost a third (30.6 per cent) on the previous year, just as B3 takings almost doubled (surging by 91 per cent) to £1.1bn.

Indeed, for the first time in well over a decade, B2 and B3 cashbox was roughly equivocal in total size: with FOBTs only just edging their AGC/Bingo competitors as the country’s largest gaming machine market, with total annual revenues of £1.2bn.

Meanwhile, gleeful B3 stakeholders looking to revel in the exactitudes of B2’s decline beyond April’s new legislative bite will have to wait until next May, when the Gambling Commission is slated to release the next of its bi-annual audits of key industry metrics.

On a more general basis, the regulator recorded “marginal” decline in overall gambling yield nationwide – gauging revenues across-the-board at £14.4bn for the year, a 0.3 per cent dip on the comparative period.

There was a more pronounced fall in actual number of businesses willing to weather the UK’s antagonistic political stance on the gambling industry: with the Commission noting a sizeable drop (of 4.6 per cent) in the total number of licensees, to 2,689.

Other losses were recorded in gambling real estate, with total count of bingo halls down by six for the annum (to a total of 651), with a far heftier casualty-rate amongst betting shops: with a loss of 236 on the 2018 posting.

Ironically, such declines would be cause for concern in other industry sectors, but not this one. What will confound most people on the other side of the regulatory fence is that this impact on their small enterprises, their local communities, their family businesses will be viewed as a victory by the regulator.