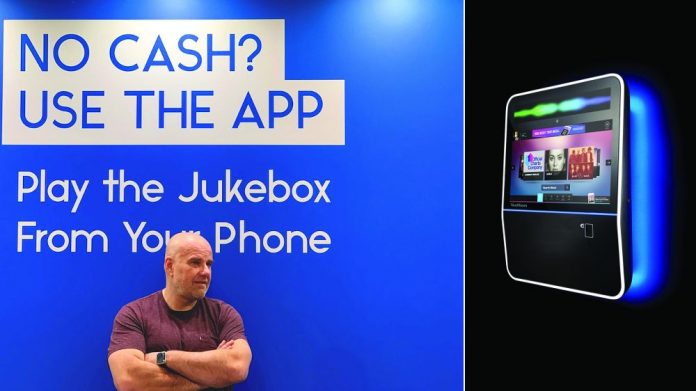 Toby Hoyte, Marketing Director at Soundnet/TouchTunes, explains why all sections of the market are just loving the Angelina.

The Angelina has dominated the headlines since its arrival in the UK a little more than a year ago – what do you put its success down to?

Toby Hoyte: There’s not one specific that you can point to, it’s more about the total package comprising its design, its visual appeal, impactful first impressions, the access to over a million tracks, the music interface, the payment terms we are offering and of course, the ultimate test – the cash box. You can design the most attractive juke of all time, but looks mean nothing if the cashbox is poor, or it’s always breaking down or it’s simply not affordable.

The team at TouchTunes has created something which really works outstandingly well in the UK and to make it relevant, the team here at Soundnet/TouchTunes has put together a deferred terms financial plan of £32 per week which includes fixed music fees. A significant number of our customers are actually paying for what is the best jukebox in the world from the cash box, which, incidentally, is 40 percent above the national jukebox average. The Angelina gives consumers access to over a million tracks which are updated daily and the cost is less than operators were paying for the V-Hub, four years ago. Great technology, driving great income at a great price – that’s why it’s so successful.

When operators go on record about the Angelina they seem to do so with some feeling: how do you explain that affinity they appear to have with the product?

TH: I should add that it’s not just operators, I’ve never known a situation in which everyone – consumer, licensee, bar staff, pub companies and operators all seem to be singing off the same hymn sheet. Only last week Chris Tulloch, MD at Blind Tiger Inns was talking about the Angelina as being the most stunning wall mounted jukebox of all time and one that had transformed the player experience. We’ve also had fantastic quotes from no nonsense business figures such as Paul Purcell of Amusement Leisure, Gamestec’s Stefan Podolanski and Phil Boulton, and Dave Meehan of Coinit Leisure to name just a few. The fact is that Angelina and before it the Playdium have served as game changers in the jukebox sector. Chris Tulloch is correct in saying his Angelinas have transformed the jukebox experience and put music centre stage. There are a very few products in any market that can command that type of feedback which is why the Angelina is such a popular juke.

In the gambling sector the move towards digital seems unstoppable, has the Angelina benefitted from this?

TH: I’ve read people in Coinslot talking about the relationship that exists between outstanding venues and outstanding product and I think that does and continues to apply to the Angelina. Pub companies are not investing tens of thousands of pounds on an interior to site a dated clunky looking piece of kit. Equally if you have invested in the latest digital gaming product you are also going to want a great looking digital jukebox as part of the joined-up offering you present to consumers. Progressive operators are recognising this and delivering a digital experience across both gaming and music. If you upgrade one part of the offer but not others it appears really disjointed. Consumers want a superior experience and the fact is that when the market moves in that direction it results in more money going into the cashbox. The flip side is that operators who don’t grasp the digital opportunity have ended up losing their best sites. It’s a false economy and a situation that can be easily avoided.

Do you think the Angelina and before that the Playdium have had an impact on how the music offering is perceived and treated by the market?

TH: I have worked in the jukebox sector for a long time now and I’ve always viewed it as an important part of the overall pub offer. However, there’s no doubt that technology is a talking point and when that technology is seen to be having such a positive impact on income the conversations you have with customers and people in the trade take on an extra dimension. I would say that without exception the pub audience encompassing both sides of the bar – staff and customers – love the Angelina and once one pub gets it mounted on the wall and entertaining the locals other venues in the area will get one so as not to be left out. When you experience that type of momentum the jukebox is going to become much more of a talk about and therefore much more relevant to everyone.

Is there any evidence to suggest the Angelina is broadening the player base?

TH: The evidence we have is anecdotal but the information that we are receiving from the sites is that the music interface and the strength of the digital offering really relates to what some people are describing as the Spotify generation. For many consumers the jukebox was all about nostalgia but the impact that TouchTunes has had on the market has resulted in the delivery of a really contemporary music experience. The increase in income has to come from three sources, firstly existing customers spending more time and money on the juke, secondly, lapsed customers coming back and rediscovering the juke and thirdly new customers being attracted to this part of the pub entertainment offering for the first time. The Angelina is a modern jukebox for modern times which delivers the full potential of music as part of the entertainment mix that licensees have at their disposal and it is succeeding in expanding the player base.