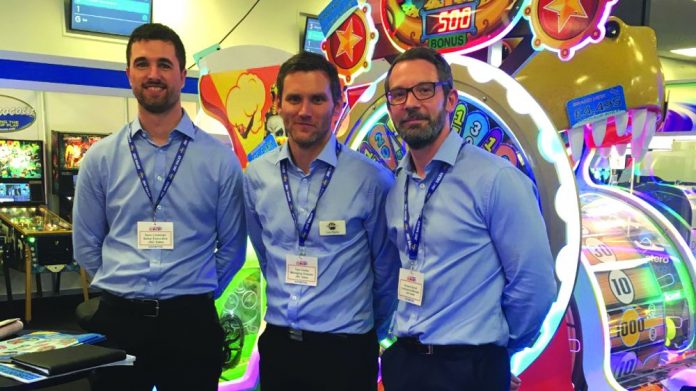 ACOS 2019 saw JNC unveil several brand new amusement machines for the UK market, all tested through the distributor’s own sites and workshop – a process which sales executive Sam Coleman maintains is key to the firm’s success.

Occupying an eye-catching stand just off the central thoroughfare, JNC Sales demonstrated just how seriously it takes the relationship between customer and supplier, with several new machines displayed purely to gauge visitor feedback.

With only those products that have already proved themselves at JNC’s own sites reaching the Olympia showcase, sales executive Sam Coleman stated the response from customers at this point in the year is crucial in preparing the machines for eventual release.

“The time of ACOS serves us quite well,” said Coleman. “We bring these machines in during the early part of the summer, we have them in our own arcades, we develop them on site, and put them through our own workshop process to make sure that we think they’re site ready.”

“Then ACOS gives us a really good chance to make sure we’ve done all the changes that need to be made. If not, we’ve still got time before general release in January or February to get them right, so the feedback we get in the next few days is really important.”

Pirates Fortune took centre stage on JNC’s stand this year, with the wheel-of-fortune style ticket redemption game appearing at ACOS for the first time, with its LED-surround central wheel attracting customers already, ahead of a proposed January launch.

Also having what Coleman called a “trial run” was Funky Snake, an eight-player tabletop video title, reminiscent of the classic Snake mobile game, designed to sit at the perfect height for young players.

“We think it could be a really good piece,” said Coleman. “But we want to get the public’s feedback as to what they would change, what we should help develop to make sure it’s a hit next year.”

However, Coleman noted that the feedback on what customers aren’t looking for is just as valuable as what they are.

“We haven’t seen as much demand for pushers as there has been, but we’ve seen more demand for redemption and kiddie rides.”

“With the pushers there’s been a lot of investment in that market in the last few years, and we spent a lot of time developing machines such as Justice League, Scooby Doo, Space Reels and they’re still at the top of their game.”

Following the show, Coleman added that work will now begin on utilising the feedback garnered to improve the prototype machines further, ready for 2020.

“We’ve had a few changes to the team and the way we workshop machines this year, so there’ll be a few things that we’re adapting and improving for next year to make sure both new and second hand gear is a better quality than ever before.”

“That’s one of the key messages for next year, that the technical team and the after-sales team will be the best we’ve seen at JNC.”