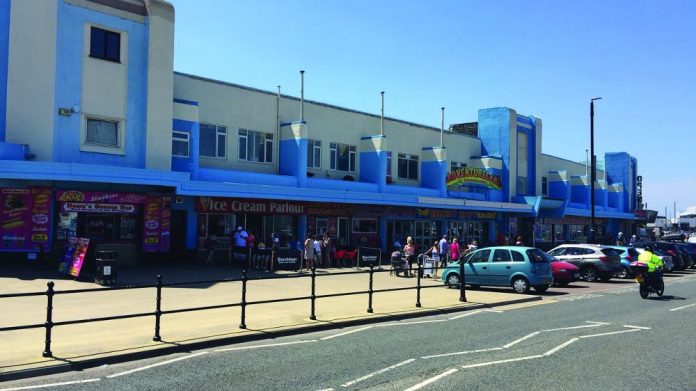 The owner of New Brighton’s New Palace building, which houses Adventureland indoor play area, has indicated his intention to sell the building to a development company.

David Wilkie has said the cost of upkeep of the New Palace, which dates from the 1930s, has made continued operation in the building financially untenable, and says that its sale will lead to its demolishment in wake of a new luxury hotel and apartments on site.

“The building is falling into disrepair, it costs £100,000 a year to maintain before labour costs,” Wilkie told the Liverpool Echo. “The storm drains on the roof aren’t able to cope with the weather today…they were built in 1939 so it overflows when there’s a deluge [which] can cause floods in the building. It’s not sustainable to run it as it is.”

Wilkie has reassured locals that part of a deal he has struck with the potential developers of the new project would see that the hotel and residential complex would also include a publicfacing arcade, which would include high-tech miniature rides, as well as the latest in virtual reality entertainment. As for his own fate, Wilkie has indicated his intention to reestablish a new funfair at a different location in New Brighton.

“I’ve owned the site since 1999, [and] my family have been in it since the early 1900s,” he said. “It tears at my heartstrings to see the place demolished, but there’s no other way forward, the costs just aren’t sustainable.”

And Wilkie isn’t alone in mourning the potential loss of Adventureland. Indeed, in speaking to local residents out and about on New Brighton’s promenade, the Echo found that the majority opinion was dead-set against the attraction’s closure.

“I think it’s a big loss to have flats in this area,” one woman told the paper. “The funfair is a great, well-known attraction… especially behind all the arcades as well. I just think it wouldn’t look as attractive.”

“I remember going to Rhyl years ago, and that went the same way,” another man lamented. “Everything disappeared…it went like a ghost town.”

Nevertheless, as Wilkie himself has been quick to point out, plans for the sale and closure of the attraction are far from being cemented, rather “just getting off the ground.”

“The funders could pull out or the council might reject the application,” he said. “It’s not a done deal yet.”

For many residents of Britain’s once booming seaside towns, the arcades and attractions are more than just a place to kill a few hours – they are a central part of the community, tracing the lively history and cultural heritage of their home.

Nowhere is this truer than in the case of Adventureland, an amusement complex in New Brighton that was first opened in 1937 and is now facing possible redevelopment due to unmanageable maintenance costs.

The arcade hasn’t had an easy journey through the decades but what a history. Part of the New Palace was used as ammunitions storage during WWII and then a social battle of its following the rise of the package holiday which impacted profits from the 60s onwards.

Nevertheless, its survival through the years attests to the determination of owner David Wilkie and its place at the heart of the local community. And with the complex facing the prospect of a new future as flats and a hotel, New Brighton’s residents, like Wilkie, are sure to feel the loss of Adventureland very keenly.