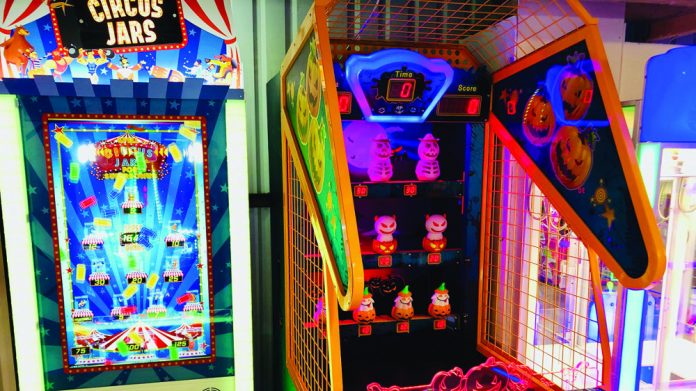 An imaginarium refers to an area specifically devoted to the imagination – and JNC’s Sam Coleman and Natalie Arnold believe the UK’s best FECs are just that, using a wide variety of innovative machines to create an environment in which player imagination can thrive.

In a world of frequent monotony and increasing bureaucracy, the seaside arcade stands out as an unconquerable anomaly. While many other retail sector’s strive to streamline into the same cost-efficient model, the FEC thrives on offering players an ocean of different entertainment options. Indeed, a variety of product is the spice of life in the amusements industry, according to JNC’s Sam Coleman and Natalie Arnold, who emphasised the importance of offering both digital and physical engagement to players.

“We think it’s crucial, not just in terms of the layout and general appearance of an arcade but also to meet the various playing requirements of arcade customers. Today’s digital games, like Circus Jars, Fantasy Bowling and Monster Smash, can offer that added visual appeal, with eyes drawn to vibrant LCD screens, and they can also enhance the gaming experience beyond standard – interaction ,” explained Coleman.

“Meanwhile, games such as Pumpkin draw on the more traditional arcade approach of customers having to physically engage with the machine, in this instance having to throw the balls at specific items to win tickets. Such products are still vital to today’s market as it provides customers with the opportunity to immerse themselves in games that are not accessible to their daily routine.” Another aspect to machine variety is in their size. Big machines have that ‘wow’ factor that can draw players to it from across the arcade floor, whereas smaller machines allow for a more personal experience or the opportunity for operators to create multiplayer hubs. Some products, however, can offer a balance of these advantages – as well as providing players with both digital and physical forms of entertainment.

“Forest Bowling is a brilliant hybrid of a traditional physical game enhanced by the digital platform,” detailed Arnold. “Players are able to throw balls down the alley before it is translated onto the vibrant screen, which simulates the bowling experience through accurate game play and special effects. At just 1.98m deep Forest Bowling does not hold as large a footprint as many other bowling games and therefore offers hugely effective ROI as a two player redemption machine.” In an industry of innovators, it’s no surprise ‘hybrid’ machines are becoming ever more common. For centuries, inventors have been combining mechanisms from different technologies, often coming up with duds, but ever so often improving on the original designs. For example, tickets on pushers are an increasing trend that many operators have capitalised on. Other products, such as Space Reels, have taken it one step further – adding a jackpot reel to a game where players would least expect it.

“The ticket jackpot reel that spins around the top of Space Reels acts as a brilliant feature for player attraction and also as added playing incentive for customers to win tickets as well as good old fashioned 2ps!,” concluded Coleman. “Pushers are still are a crucial part of an arcade’s setup as they are universally popular and can still be played by people of all ages. Space Reels has a modern-feel to appeal to the next generation of arcade visitors whilst maintaining the traditional values of the seaside pusher. Standing at just 1.3m wide it is also a hugely space-effective machine that gives operators a lot of flexibility when it comes to the positioning of their pushers.”