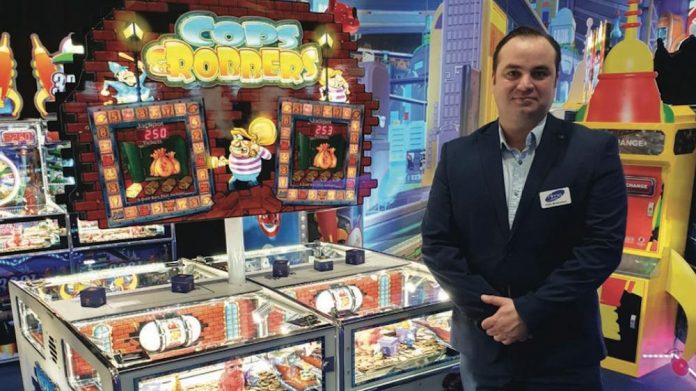 Chris Widdowson, Key Account Manager at RLMS Sales, likes nothing more than a day at the seaside and believes the Bulldog currency of FUN translates directly to the cashbox.

From the time that you’ve spent talking to operators at Britain’s coastal resorts, what’s your impression of the offering and what do they deliver in terms of fun and entertainment?

Chris Widdowson: What’s clear to me is that the British seaside offering has never been more exciting and more compelling. Competition for the leisure pound is intense and seaside operators have really risen to the challenge with a can do attitude. The offering is underpinned by FUN and I think the experience that’s been offered is one which centres around the family. People like the buzz of winning and redemption in particular gives holiday makers the opportunity to walk away with a quality memento of their day at the seaside or, if they are on an extended break, save up their tickets for some great and highly imaginative prizes. Coastal operators know what their customers are looking for and they spend a lot of time and knowledge exploring the latest ‘must have’ gifts or prizes. The momentum has switched away from low stake gaming in favour of pushers and redemption, two product types that are associated with the Great British seaside holiday. If the seaside currency is FUN then these sectors deliver it in spades.

CS: How quickly can operators expect a return on their investment?

CW: Because every venue has its own dynamics and overheads this is never a straightforward question to answer. But what I can confirm is that we had a number of customers who purchased Bull- dog pushers last year who saw their investments pay for themselves within the main season.Some of the industry’s most respected operators, personalities such as Bill Cain and Charles Thurston, have both gone on the record quoting Bulldog’s play appeal, quality of build and their cashbox. One operator has referenced the physical build quality of the cashbox as evidence that Bulldog products are built to take money.I think the easiest thing to do is speak to operators who have invested in the Bulldog brand to see what they think.

CS: What Bulldog products have been in most demand over the first quarter of the year?

CW: I would point to two – Cops N Robbers and Pac-Man. As a four player Cops N Robbers has a smaller footprint but it packs a punch. As the first pusher that’s been integrated with the board game feature it involves the player a lot more and gives it a stand out quality. Word of mouth is so important and when it became clear that Cops N Robbers was doing the business, we started to receive calls from operators wanting to ensure they were going to get their order,so much so,that we sold out our first production run even prior to EAG. Pac-Man is one of the best known names in arcade history.It’s bright, colourful, the design fits perfectly in an arcade and it’s instantly recognisable. It’s a winning licence, it has a timeless appeal and it’s available in a variety of different configurations offering operators a great deal of flexibility and choice.

CS: With Easter approaching what are your customers telling you about the range and what does Bulldog contribute to their businesses?

CW: Every operator who has come in contact with a Bulldog product references the quality of the build:the range is built to take money and its built to last,facts which enhance and accelerate the speed with which operators receive a return on their investment. When we entered the market the vision was to add some excitement to the game selection that was available and to give operators a broader choice of games to select from. The feedback I receive on my travels confirms that we have succeeded on this front, although we accept there’s always more to do and more that we can achieve on this front and we are determined to carry on talking with and listening to our customers. Play appeal is difficult to break down and discuss,but I think a product either has it or it doesn’t. The sound and appearance connects with customers which in turn makes Bulldog products stand out from other machines on the floor and helps bring in new customers.When you’ve got a great centrepiece there’s every chance of attracting new customers and boosting bottom line profits.