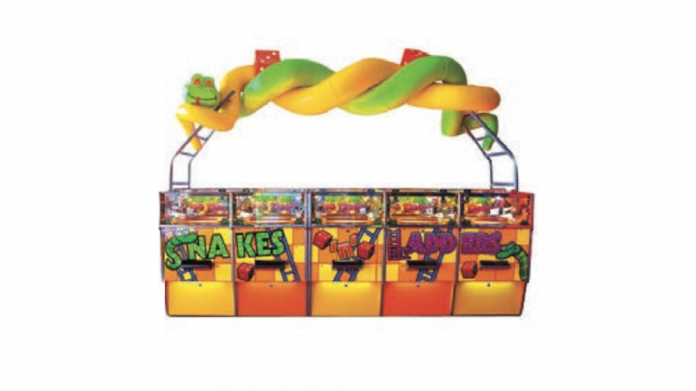 Unmistakable gameplay and additions such as ticket payout keep pushers central to operational planning comments Sam Coleman, sales
executive at JNC. Add to that the broadest possible family appeal and it’s clear to see why the sector has remained so integral.

Coinslot: Pushers have always been a mainstay of the amusements industry, but their rise in recent years has been phenomenal. What is behind this major resurgence of pushers and why are they so popular?

Sam Coleman:“Pushers have always been synonymous with the amusements industry, and time spent in the development of both the manufacturing and design have really helped them grow in recent years.
You only have to look at some of our biggest selling pushers in recent years, from Clockwork Orange and Jurassic Park to Justice League and Scooby Doo, to see how their overall gameplay and design have developed and how this correlates to improved player interaction and cashbox takings.
“The ticket payout options on many newer pushers have also offered many sites
an extra outlet for their customers, and offer a genuine ticket redemption
appeal for players.”

CS: How important is the pusher to the arcade model both in terms of income and footfall?

SC:“Many arcades will plan their arcades around their pushers, with customer attraction and income at the top of their agenda. Machines such as Space Reels and Scooby Doo have catchy soundtracks and help entice people not only on the game but als o into their arcades. In a developing world of merged media and online gaming content, pushers are also unique in their ability to offer a game that can’t be played anywhere else.”

CS: Can a licence make a game?

SC:“Scooby Doo and Justice League were very effective in their licensing as it helped the pushers reach out to the perfect demographic for many FEC sites, however there’s a wealth of non-licensed pushers that are still hugely popular because of their design and overall gameplay, such as Snakes and Ladders, Clown Around and Around the World, which JNC Sales can still supply second-hand.”

CS: Where can we look for the next phase of pusher innovation?

SC:“JNC Sales will always work with manufacturers to help design and distribute the next chapter of pushers.
Space Reels was unique in the sense of bringing in a UFO-themed top flash to utilise the ticket payout feature, whilst also adapting the shape of the beds to ensure they were still wide for customer whilst also functioning as a footprint effective five player pusher.”

SC:“Pushers are ideal for the whole family, with children engaging with the simple gameplay and cabinet designs whilst parents (and grandparents!) are given the opportunity to reflect on their own childhood memories by playing the machines. JNC have focussed on developing games that can be played by the whole family to ensure that arcades benefit from increased playing time and time spent on site, thus increasing total revenue and keeping everyone happy.”