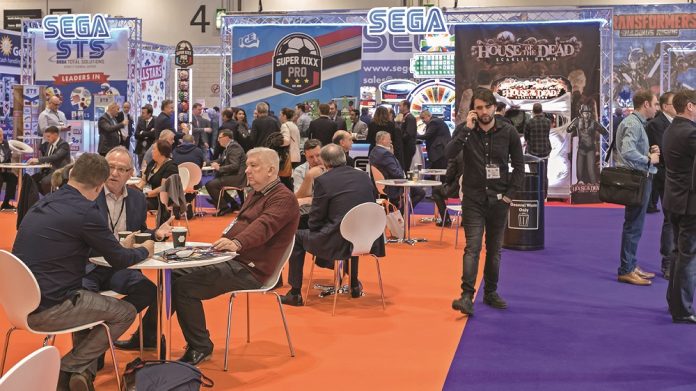 EAG/VAE chairman Martin Burlin lets Coinslot in on what he saw as being some of the finer points of last month’s show.

It’s exhibition season for the UK and whilst ICE was undoubtedly top of the industry agenda last week, positive reflections continue to flow for 2019’s opening show on the London stage, EAG.

Martin Burlin, the man driving the fortunes of UK coin-op’s flagship event, has had time to take stock of some of the high points from January’s tenth anniversary outing of the EAG International and VAE; and there were many according to the industry veteran.

Whilst the metrics of “success” for any given trade event are regularly gauged via the breakdown of the nitty-gritty statistics, Burlin was adamant that it was some of the more intangible qualities of EAG 2019 – that of its atmosphere and its quality of attendees – which really made it stand out from the crowd.

“There was a real buzz at this year’s EAG International & VAE, and this could be felt from the moment the show opened, right through to the final day,” he told Coinslot. “This year we received a particularly high number of positive comments about the quality of attendees, with exhibitors confirming that most visitors were genuine decision takers.”

But what of visitor numbers – that all-too-common yardstick of success? Burlin was bullish on headcount at EAG. He readily acknowledges that footfall remains “static” since 2016, but insists it’s more about quality – Burlin drives home the point that the “number of visitors do not necessarily reflect the true value of the show to its participants.”

His argument carries significant weight;he pointed first to the fact that the third and final day of the show (a Thursday) was “the busiest it has ever been.” At the same time, the EAG chairman was also content with the growing reach of the show, highlight how EAG has now well-and-truly earned its “international” title – with its last three years seeing over a quarter of attendees (27 per cent) flying from elsewhere in the world.

To this end, the best attended seminar at last month’s show wasn’t hosted by a UK-based organisation, but by Italy’s Gioco News – and dealt with challenges within the country’s redemption machine market.

For Burlin, that served as a clear sign that “the show is of growing importance to overseas operators.”

Meanwhile, shoring up the event’s well-sustained reputation for the latest in amusements innovation, Burlin was particularly proud of some of the new immersive products showcasing on similarly new EAG/VAE exhibition stands.

“This year we attracted a significant number of new exhibitors, the majority being technology businesses,” he said. “In particular, VR and AR featured strongly and these companies reported doing good business at the show.”

Further bolstering the EAG quiver this year in Burlin’s mind was the show’s extensive learnings programme: with more seminars on offer to delegates than ever before.

“This year’s seminar programme was wide-ranging and, in fact, the largest in the show’s history,” he told us. “It came with a show first in the form of the tailored oneday course from the Foundations Entertainment University…[which] was a huge success, demonstrating that participants will invest if the subject matter is relevant and well-presented.”

But above all, Burlin heralded the show’s function as the leading industry platform to lay out its priorities: amidst an increasingly hostile public discourse on issues like addiction.

“EAG International & VAE is a show owned by the industry it serves,” he argued. “At a time when we are under greater scrutiny from government and the media, it shows the human side of the industry.”