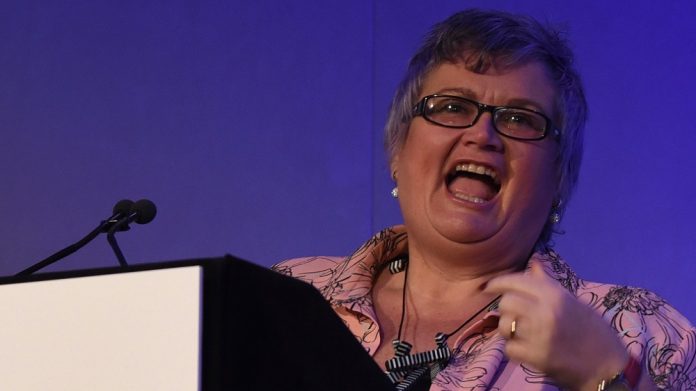 The BACTA AGM saw a standing ovation for a genuinely stirring speech from Labour MP Carolyn Harris – who commended BACTA and the industry at large for “having principle” in its fight against high-stake FOBTs.

The house representative for Swansea East and deputy leader of Welsh Labour has been a vociferous opponent of betting terminals since first winning her seat in 2015 – and she was full of praise for the allies that she’d quickly acquired within the amusements trade.

“I met some fantastic people, and we all shared once principle,” she told the assembled industry luminaries. “You all knew that despite defending your industry, you [also] understood the devastation that FOBTs were causing not just to your trade, but to communities.”

Meanwhile, there were shouts of “here here!” and a spontaneous round of vigorous applause as Harris laid waste to the Gambling Commission whilst its chief executive Neil McArthur looked on.

“I’ve got to say, I’m very disappointed with the Gambling Commission,” she said. “They did nothing to support us, they sat on the fence, they tried to be neutral – [and] this wasn’t a subject to be neutral on, this was a matter of life and death for a lot of people.”

The room was with her as Harris pressed on with her condemnation of both the Commission and the Treasury, whom she had insisted had “never looked at the consequences or the damage to communities, never spoke to the parents of children who have taken their own lives.”

Indeed, Harris argued that the inertia from the regulator was particularly confounding, given what had been an unusual degree of cross-party support for an FOBT clampdown.

“You had government MPs coming up to an opposition MP who is fairly new at the game, saying ‘you were right and we’re behind you 100 per cent,’” she recalled. “You had a minister resigning and a former leader of the conservative party saying “there are so many people wrong on this.”

Meanwhile, there were more vocalisations of assent from the crowd as she looked ahead to future areas of potential co-operation.

And with regards to both points, she issued the starkest of warnings to the GC’s Neil McArthur and his colleagues.

“I say to the Gambling Commission, I say to the Responsible Gambling Trust, if you sit on the fence this time – I will come for you.” With the entire room on its feet at this pronouncement, Harris signed off with a firm pledge of her continued allegiance.

“There are so many people in this room who started off as just colleagues, but which have become true friends,” she declared. “We can all be proud that what we won was a moral argument, and I’m very proud to stand up and say to you well done, thank you, bring it on – we’ll have a go at something else.”