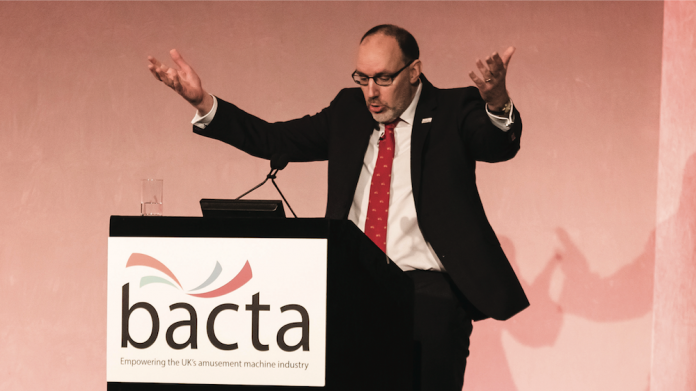 The broad reach of Bacta will be in evidence this week when the membership gathers in London for the annual convention. Coinslot asked John White what we should expect from the forum.

Bacta will be assembling in London this week for one of its most important annual conventions in many years. In the wake of stormy FOBT waters, which seem to have lasted for…ever, that all-important seventh wave is coming into shore. Riding it are some 20 key Tory MPs and a small contingent of DUP colleagues – all pushing to get the set date for the £2 FOBT stake ditched from the finance bill and brought forward.

Job done for Bacta, one assumes, on this occasion; the trade association has lobbied, and hard, for action on the much maligned terminal, and likely so at a price – notably in its inter-industry relationships and confused public assessment of gaming machines per se.

The upcoming AGM will test that measure. In the meantime, and at least up until the eve of the association members gathering, the most established trade body in the gaming and leisure industry must wait to see if the politicians can deliver.

So, is it back to business for Bacta? “Well, our focus must be on the future, that’s our role,” CEO John White told Coinslot. “It has to be about reshaping our industry for the digital age. Social media, technological machine innovation and modern venues,” he rolled off before a slight pause. “And of course FOBTs.”

FOBTs indeed. Everything would have been ok if it weren’t for those darned pesky FOBTs – well, that’s how Scooby-doo usually ends an episode. But Bacta’s AGM will be far more definitive.

“We have to re-establish the amusement narrative. Our industry supplies games of chance and non gaming equipment for people’s low cost entertainment,” White proclaimed.

And conveying that message will certainly be a major challenge going forward. If there was a downside to Bacta’s extremely vigorous anti-FOBT campaign, ironically it would be its effective and highly successful delivery. It will be argued that the punters, the players and the wider public possibly lost sight of the differentiation between gaming genres. The poison from the FOBT debate had seeped into everything gaming and gambling. The public simply couldn’t – or wouldn’t – tell the difference between Category B, C, D or FOBTs.

But White is clear in one thing. “Yes we have a foot in the gambling camp, but we cannot be characterised as similar to gambling in a casino, bookmakers or online. We should be treated proportionally.”

And that seems to be the focus emerging ahead of next week.

“Politically, we want to refresh our relationships in the post FOBT world based on the new narrative, but working in partnership to develop the industry and expand the player base,” White confirmed.

And the Bacta-based industry is already well placed to drive this forward: “This will sit alongside the growing number of social responsibility initiatives we are committed to deliver. We hope they will support that. I hope they will also acknowledge the truth of my first answer and inject balance and proportionality to their thinking about our sector – it’s different.”

And as daunting as that sounds, it’s also a welcome shift away from a negative battleground to a more positive, exciting programme. “Next week we will hear about how we can grasp modern forms of communication and really take the industry forward,” White enthused.

Finally, after so much despairing commentary during the FOBT debate, a sigh of relief and possibly belief for the industry? The Bacta AGM will certainly be the forum to signal that mood swing, and an impressive, influential audience to boot.

Expectations are high that, at last, the industry might be able to tell a different and more reflective story of what amusements and soft gaming is all about.

But then, there’s always those darned pesky FOBTs.