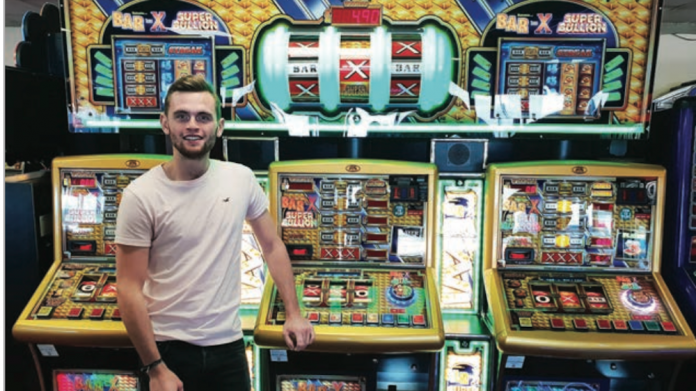 A jewel on Herne Bay’s seafront, Cain’s Amusements has enjoyed a busy season, but there’s no resting up for the centre. There’s a new machine on the floor and it’s proving pretty popular. Reflex Gaming’s BullionBar X has hit the Kent coast. Scott Turner talks to Coinslot.

Cain’s Amusements has been impressed with its latest machine on test, and it’s hardly surprising. Combining the classic Bar X format from Electrocoin, with the technological innovation of Reflex Gaming, who could have doubted its appeal.

Scott Turner of Cain’s certainly didn’t. “We very much liked the modern approach to the classic Bar X gameplay that we know our customers already enjoy,“ he told Coinslot, paying particular reference to “the classic sound effects coupled with the latest stylings of a Bullion Bar 3 player feature machine.”

In effect, Turner says, it has “all the bells and whistles”.

And the Herne Bay customers seem to like what they see. “Test figures are promising so far and interest in the machine is coming from customers who enjoy a Bullion Bars style top box feature machine, as well as those who would traditionally stick to Bar X style single player machines. We’re very pleased to have the first machine of the production line from Reflex.”

Cain’s is a wise choice for the Bullion Bar X trial as Turner noted:“ Herne Bay is on the up and we’ve noticed a distinct increase in the amount of families frequenting the arcade. These aren’t necessarily just families that are coming to the seaside for the day.”

Which is an impressive performance by Cain’s,it does after all have a great deal of competition. “As we are all well aware, we’re competing with bowling alleys,cinemas and all forms of family entertainment,” he explained.“ And that’s the reason we like to make sure we have that balance of machines that can keep an entire family happily entertained for a period of time, as a visit to the cinema also would. If the entertainment is good,people will pay to enjoy it.”

And in this sense, it’s all about product. Turner is determined to get the best machines on site. “It’s so important to keep the machines refreshed, with the latest AWPs, redemption pieces such as Coconut Shy and cutting edge pieces, such as Virtual Rabbids The Big Ride, which we are about to take delivery of at our Leysdown site, giving everyone the chance to enjoy one of the latest developments in entertainment.”

Cain’s are clearly honed into the product offering, with Turner always on the look-out for innovations that hit home. “The‘ Midway’ style games continue to gain in popularity. Games like Down the Clown, Bean BagToss and Coconut Shy are the type of games that customers love, especially when there’s the opportunity to win and redeem redemption tickets at the end,” he explained. “We are always looking for innovative new games and products, arcades have always used technology to great effect and that’s not going to change any time soon!”

Which takes us back to reflex reactions: Cain’s really are taking classic gaming and turning it into modern leisure entertainment.