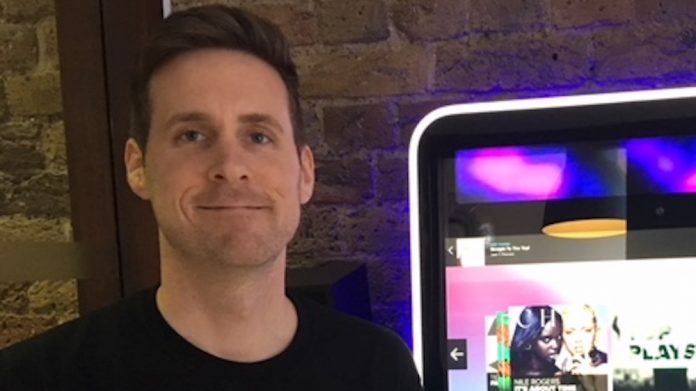 Following a classic roster of hits from Phil Silver, we journey inside the jukebox to discover which songs bring joy to a technician’s ear. This week, Carl Adams, Technical Service Representative at TouchTunes, reels off some unique picks encompassing Britpop, cartoon crabs and Tim Lovejoy on a guitar…

Carl has been active in the industry for more than a decade bringing his technical prowess and knowledge of jukeboxes, fruit machines and arcade games to a number of roles across a variety of sectors. Following seven years with Claremont Automatics Ltd, he joined TouchTunes in 2016 as a Technical Service Representative and has been instrumental in customer and operators’ knowledge of machines up and down the country by ensuring he visits every new TouchTunes customer to assist with their first jukebox installation.

I guess the first song I remember hearing was a classic slice of Dad Rock which was fittingly played on my Dad’s record player – Rockin’All Over The World by Status Quo.

There are two which spring to mind – Has It Come To This by The Streets and Still D.R.E by Dr. Dre ft. Snoop Dogg. So many memories of all my friends passing their driving tests and thinking we were cool by blaring these songs out of our cars.A brown D-reg Ford Fiesta and a purple Cinquecento, not the cars of choice but all we could afford, we were definitely the original Inbetweeners.

Had to wrack my brain on this one but I remember saving up some pocket money and buying Shine by Aswad on cassette. I had to go back and listen to it again and I’m glad to say the song hasn’t aged that much!

You’re taking me back with these, I think in all honesty it had to have been one of the NOW albums, NOW 23 I think. I don’t believe it was a stand-out year but it was my first!

Green Day’s American Idiot. I just can’t stand it now, so much so I have to change the radio station or TV channel as soon as it comes on.

Since You’ve Been Gone by Rainbow. When Soccer AM was SOCCER AM, there was an episode where Tim Lovejoy pretended to play this song on guitar and I’ve never forgotten it or the song.

This one is easy, Bloc Party’s Like Eating Glass. I used to travel a lot to see friends at Sheffield, Leeds and Cardiff universities and this was one of our favourites which still makes me want to get on the dancefloor.

Shiny from the Disney’s Moana. It’s sung by a giant crab in the film, my three-year-old son loves it and it’s been stuck in my head ever since.

Potentially a bit of a tear jerker but for I’d have to go with Spanish Sahara by Foals. Listening to it again now, it’s definitely going to have everyone in bits.

I just heard a new song on MTV Dance Hits for the first time, Happier by Marshmellow & Bastille. Not a bad track, I’d give it a 6/10.

I’m definitely having to work my grey matter thinking back for some of these! I think it was The RiverBoat Song by Ocean Colour Scene – a classic slice of 90s Britpop. I put this on during a night out with my mates in the Hyde Park Pub in Leeds before we saw the band live later that night at the University.

Call now to find out about the latest TouchTunes jukebox deals or to arrange a demo, simply contact Toby Hoyte on 07970 229124
Also, if you’d like to share your musical memories and feature in an upcoming MyTouchTunes, call Toby or email: toby@soundnet.net