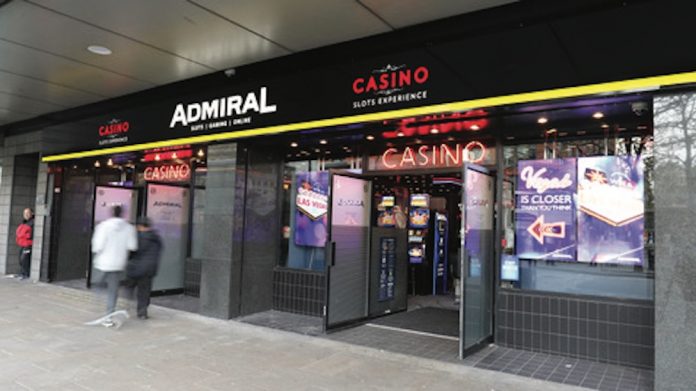 Revenues were up but profit dipped at Luxury Leisure last year, as the new giant in the AGC sector rallies around its Admiral brand.

Financials filed by Luxury Leisure, the Novomatic-owned company operating the Admiral AGC brand, show that its gaming revenues were up by 4 per cent last year, with total turnover in excess of £62m.

The posting represented a £2m gain on 2016 takings,but the company’s profits for the year saw a reduction – down from £7.4m to £5.3m – due to its ongoing investment and re-branding exercises.

Novomatic UK acquired Luxury’s AGC and tanning salon portfolio in 2014,with a later take- over of Australian-owned arcade operator Talarius occurring two years after. With Talarius in the fold, Luxury’s total estate was brought to 244 AGC outlets – representing over a fifth of the UK market.

The company has spent the intervening time unifying its outlets nationwide under the Admiral brand. Recent months have also seen Luxury open a new location in Portsmouth, coinciding with a roll-out of refurbishment efforts and new gaming product throughout the estate.

“The company continues with planned reinvestment ensuring its customers have available the best possible offer of equipment,” said Luxury’s director Zane Mersich.“Venue refurbishments are ongoing to further enhance the customer experience and support the machine investments.”

Overall, acknowledging the “competitiveness of the market and general economic climate,” Luxury said its directors were“satisfied” with the latest key performance indicators.

“The future profitability of the company could be at risk due to environment it operates within, due to changes in government legislation, Brexit and the UK economy that could impact the gambling industry,” said its directors. They were quick to add, how ever, that:“[We] are satisfied that appropriate strategies have been developed to ensure the company is able to minimise the effect of any adverse impacts.”

Meanwhile,improvements and re-branding saw Luxury increase its borrowing last year – with the business now owing its creditors just over £6.3m. But investors’ minds will rest at ease:Luxury has obtained a letter of ongoing support from parent-company Novomatic, which it claims provides its directors with “a reasonable expectation that the company has adequate resources to continue in operational existence for the foreseeable future.”