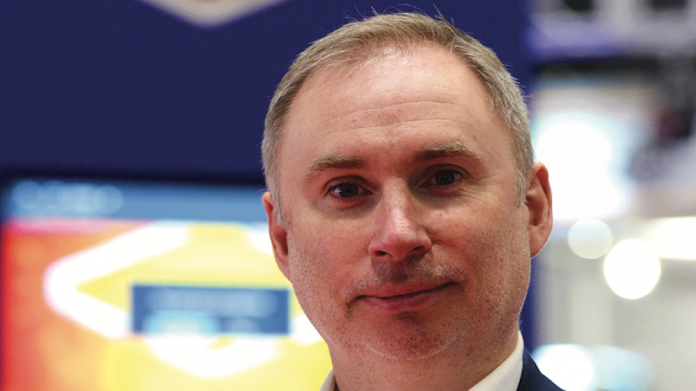 This summer saw Michael Jackson’s Thriller lose its title as the biggest selling album of all time to The Eagles’ Greatest hits, so following John Sullivan’s musical odyssey, it felt only right to pass the musical torch to a true Eagles aficianado and New Kid in Town for this feature, Quentin Stott, Managing Director of Reflex Gaming.

Quentin’s entire career has been spent in the gaming industry, starting in a small but entrepreneurial business called BWB which was subsequently acquired by Barcrest (now Scientific Games) a few years later. In 2004 he established Reflex Gaming, a company specialising in the design and production of market-leading analogue and digital gaming machines for the UK’s land- based industry. With its recognisable product range, the company has grown to employ 54 people at its 28,000 square foot facility in Newark, UK and smaller facilities in Europe.

Kung Fu Fighting by Carl Douglas. I was about 6 years old and kept playing the single my dad had bought whilst jumping around the room with a tea towel tied around my head whilst attempting high-kicks.

I spent a couple of years from the age of 10 to 12 in Canada and The Eagles were the band I listened to the most.When I returned to school in England I kept listening to them and have seen them live three times now but Take It To The Limit reminds me most of that period.

Number Of The Beast by Iron Maiden which I bought from WH Smith in Newark in 1982. Me and my mates absolutely loved it and the song got played to death.
First album ever bought?

Highway To Hell by AC/DC. I was really into heavy rock and AC/DC were, and still are, one of my favourite bands. They’re another band I’m glad I saw live, especially as Brian Johnson has now stopped touring.

Jerry Lee Lewis’ Great Balls Of Fire. It’s also my defacto drunk karaoke choice as it’s short, pretty easy to remember, and even if I forget the words, I just mumble my way to the ‘Goodness Gracious’ bit.

Anything by Oasis. I’m not sure why I don’t like them but I must be one of the only people really hoping they don’t get the band back together!

I have a few songs I usually only play, very loudly, when I’m on my own in my car, and of those I’d call my guilty pleasure, All Along The Watchtower by Jimi Hendrix would be it.

Disco Inferno by The Trammps. I have a playlist on my phone which I call Awesome Songs and this track kicks off the set.

Love Will Keep Us Alive by The Eagles. My wife and I chose this as the first dance at our wedding and it holds a lot of personal meaning to us. It’s not well known, but I can’t think of a better song to go out with.

Planet Rock was just playing Pink Floyd’s Comfortably Numb which is one of my favourite of their tracks. It’s the type of song that makes me want to dust down my old CDs and revisit all their albums.

Bat Out Of Hell by Meatloaf. I used to head out to a local village pub on my underpowered Suzuki ZR 50 SL where we cranked up the jukebox until we couldn’t afford anymore Lager and Black or lager tops. This song still reminds me of The Plough at Norwell and that old vinyl jukebox.

You can buy the Playdium – the UK’s top earning jukebox – for just £14.50 per week. Benefit from a 2 year warranty, no fixed music fees from day 1 and your jukebox delivered within a week. For more information and to arrange a demo, call Toby Hoyte on 07970 229124 or email toby@soundnet.net